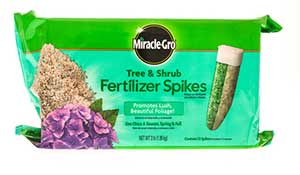 This will be an important earnings report from Scotts, as the SMG stock price is currently underperforming compared to the broader market.

So what will move the stock price after earnings? 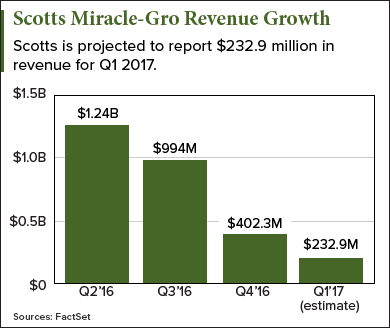 Scotts is a seasonal business, and most of its revenue is generated in Q2 and Q3.

But because of Scotts' seasonality, shareholders should remember to focus on the long-term results…

According to FactSet, analysts expect Scotts to report YOY sales growth of 5.8% for the full-year 2017.

The company is projected to report an earnings per share (EPS) loss of $1.25.

The Roadmap to Marijuana Millions: This exclusive 90-page "Pot Investing Bible" is now being offered to Money Morning readers. Click here to learn how to get a copy absolutely free (supplies limited).

The company generally raises its dividend each August.

Here's a breakdown of the total dividend payouts since 2013:

While Scotts is not expected to increase its dividend this quarter, shareholders should still pay attention to the earnings call on Jan. 31 for any news on dividend hikes for the future.

Since 2014, Scotts has been acquiring companies to diversify and increase its revenue sources.

Its acquisitions since July 2014 include the following companies in the table below. 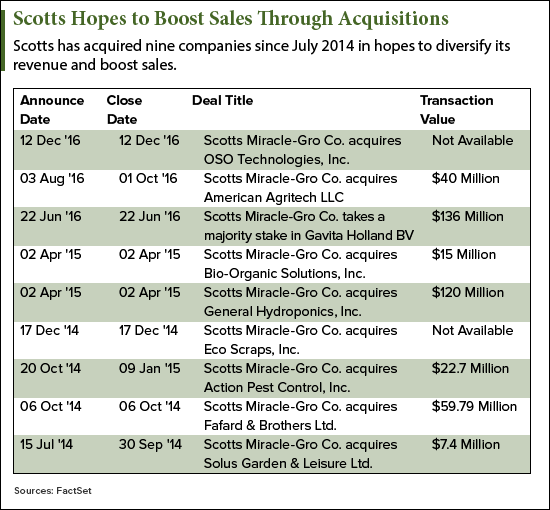 Shareholders will want to pay attention to updates on how these acquisitions are performing.

Also, shareholders will want to watch for news on any new acquisition plans.

Scotts is known for being a leader in lawn care and gardening since 1868.

When the economy seemed to be flourishing in the early 2000s, mega retailers like Home Depot Inc. (NYSE: HD) and Wal-Mart Stores Inc. (NYSE: WMT) were expanding their locations.

And because each store carries Scotts' products, Scotts' revenue climbed 80% between 2001 and 2009.

But after the financial crisis of 2008 and 2009, Wal-Mart and Home Depot stopped expanding and shut down stores.

So in order to boost sales, CEO Jim Hagedorn made what some consider a controversial decision: He invested in the marijuana industry.

In 2015, Hagedorn purchased two companies that specialize in soil and fertilizer for cannabis growers. In July 2016, he also invested a 75% stake in Gavita International, a hydroponics equipment company.

And it appears Hagedorn's forward-thinking decision is paying off…

As of December 2016, Scotts' hydroponics business generated roughly $250 million annually, according to Bloomberg.

According to Money Morning Director of Tech & Venture Capital Research Michael A. Robinson, the value of the hydroponically grown plants market is skyrocketing.

The global crop value of hydroponically grown plants is expected to climb from $17 billion in 2013 to $24 billion by 2018.

For Q1 2017, SMG shareholders will want to watch for any updates to Scotts' marijuana holdings, such as General Hydroponics and Gavita.

Because of Scotts' diversified revenue sources, Robinson is bullish on SMG stock.

In fact, he believes the SMG stock price could climb double digits in less than a year…