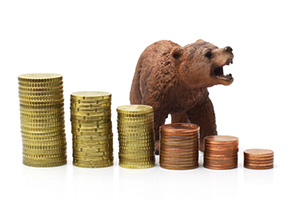 In Dow Jones news today, the Dow fell after a sharp decline in banking stocks.

Investors are also wondering if and when President Donald Trump and Congress will move on reforming the corporate tax code and repealing Dodd-Frank.

With most of these policy actions largely priced into the market, timing is essential.

A delay until 2018 could rattle confidence, particularly at a time when investors are growing increasingly worried about the stability of the European financial sector.

Crude oil prices were rising despite news that U.S. inventory levels increased for the fifth consecutive week. According to the Energy Information Administration, the United States saw a supply increase of 13.8 million barrels. That is far higher than analysts had projected.

Energy traders were optimistic about North American energy production after the U.S. Army announced it would provide the last permit for the construction of the Dakota Access oil pipeline. The pipeline project has been at the center of major protests by Native American tribes and climate change activists. The pipeline will connect the shale oil fields of North Dakota to Illinois hubs, which connect to the southeastern refinery network.

But the big news today is the chatter surrounding Snapchat.

Turn on CNBC or read the pages of mainstream periodicals, and they'll tell you that this is one of the greatest money-making opportunities for an IPO in a long time. Many pundits are saying that it is time to invest in Snapchat stock when it goes public in March.

A lot of banks and accredited investors will make a lot of money when this company debuts. But the average investor may have to pay a huge premium just for a chance to own the stock.

We urge investors to take a different strategy. Money Morning Director of Tech & Venture Capital Research Michael A. Robinson has a way to play the Snapchat IPO that limits risk and can maximize your profits. You can find out more about Robinson's advice, right here.