If there's one word that captures the price of silver performance last week, it's volatility.

But that dollar strength turned out to be temporary. U.S. Federal Reserve Chair Janet Yellen's testimony wreaked havoc on both the dollar and the silver price during Wednesday's session. However, after the market digested these inputs, the price of silver managed to close the week up 1.1% from the Monday, Feb. 13, open of $17.91.

Don's Miss: An incredibly rare gold anomaly is shaping up in the markets as we speak — one that has occurred ONLY twice in the past 20 years. And it's about to happen again. Details here…

So what does that imply for silver prices going forward? I still think the metal has plenty more upside potential in 2017. In fact, my new silver price prediction shows the metal gaining at least 21.5% later this year.

First, let's review the price of silver this past week…

Why the Price of Silver Jumped 1.1% Last Week

Silver prices saw sharp swings on Tuesday thanks to more movement in the dollar. They peaked near $18.02 in early morning trading in response to a softening dollar. But the greenback reversed and got stronger, dragging the price of silver down to $17.79 before noon. It eventually gained 0.7% to close at $17.92.

Here's how silver trended during the Tuesday, Feb. 14, session…

Yellen's testimony to the House Financial Services Committee on Wednesday influenced the dollar and silver. Her teasing three 2017 rate hikes sent the dollar surging, which weighed down the price of silver.

But as you can see below, the dollar spike on Wednesday was only temporary… 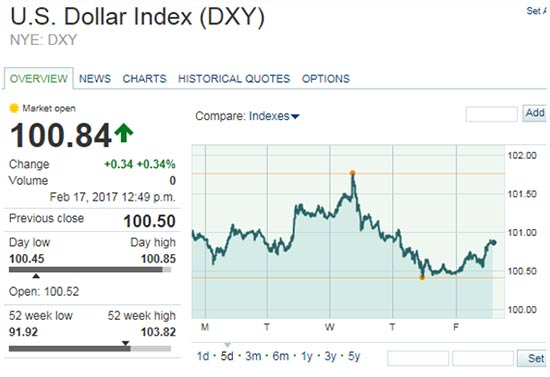 On Thursday, Feb. 16, silver prices jumped higher once the market digested Yellen's comments. Traders started to price in a weaker dollar as the effects of the rate hike statements briefly wore off. The price of silver logged a 0.6% gain and settled at $18.06.

Renewed strength in the dollar on Friday weighed silver prices down for most of the session. The metal opened lower $17.99 but pushed higher later in the day to close at $18.10. With that, silver posted a weekly gain of 1.1%.

There's no doubting the importance of silver closing above the psychologically significant $18 level last week. That's because the $18 mark is extremely close to silver's 200-day moving average – an important indicator of where prices are headed this year.