The Winklevoss Bitcoin ETF (BATS: COIN) is a proposed exchange-traded fund that will buy and hold Bitcoin to back the shares investors have purchased.

Although unusual, in that it is based on a digital currency and not a physical commodity like gold or oil, the Winklevoss Bitcoin ETF will nevertheless be structured in very much the same way.

The Winklevoss twins, Cameron and Tyler, have said on multiple occasions that their fund is modeled on the SPDR Gold Trust ETF (NYSE Arca: GLD). With the SPDR Gold Trust, the fund buys and holds physical gold to back the shares investors have purchased.

Each share will represent approximately 1/100 of a bitcoin. According to the most recent amended S-1 filing, the Winklevoss Bitcoin Trust plans to sell 10,000,000 shares at $10 each.

The offer price will probably need to rise to match the rising Bitcoin price, though. If Bitcoin is trading at $1,200, the offer price will rise to $12. But if the SEC approval news touches off a fierce rally, as most expect, the price of Bitcoin could double prior to the IPO. 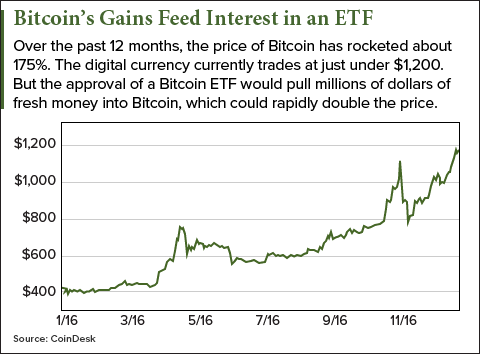 That means we could see a Winklevoss Bitcoin ETF offer price as high as $20 or $25.

Of course, many investors are most interested in when they'll be able to actually buy shares of the Winklevoss ETF.

It could be sooner than you think...

When to Expect the Winklevoss Bitcoin ETF

The SEC has until March 11 to approve or deny a rule change that would allow the Winklevoss Bitcoin ETF to have an initial public offering (IPO) on the BATS BZX Exchange.

The rule change is required because Bitcoin is a cryptocurrency. Until now, no one has ever tried to launch an ETF based on a digital commodity.

SEC approval would end a journey that started in July 2013, when the Winklevoss twins filed the first version of their S-1 form.

Should the Winklevoss ETF win SEC approval, the IPO process will start. Still, it will take several months before the actual IPO occurs. But unless unexpected complications should arise, SEC approval will result in a Winklevoss Bitcoin ETF IPO by summer or fall.

The actual IPO is likely to cause another spike in the price of Bitcoin. That's because the Winklevoss Bitcoin ETF is expected to attract as much as $300 million in its first week, according to an estimate by Needham & Co. analyst Spencer Bogart.

Bogart is pessimistic about SEC approval, however, putting the odds at less than 25%.

But several factors suggest the odds of the Winklevoss Bitcoin Trust getting SEC approval could well be much higher...

Why the SEC Would Approve the Winklevoss Bitcoin Trust

I wrote "I need more education on this" what else do you need? I want to understand bitcoin, and what they are good for. Can I buy a loaf of bread with a bitcoin?

Thanks for reading Money Morning. Some merchant do accept Bitcoin, but only a minority. But Bitcoin isn't just another way to buy stuff – we don't need that. It's a digital currency that exists outside the control of any central bank or government. Bitcoin also allows two individuals anywhere in the world to conduct a transaction without the need of any financial institution.

In addition, Bitcoin's underlying technology, the blockchain, can attach verifiable ownership to transactions. This feature could be used in real estate transactions or even as a way to certify voting. The Nasdaq exchange is already using this tech to speed up settlements of trades.

This is just a very brief summary, but I hope it gives you some idea of why Bitcoin has become a phenomenon.

Looking forward to hearing more. It is very interesting and I may be interested in the stock price.