The arrival of the first Bitcoin ETF will have a bigger impact on the Bitcoin price than even most of the digital currency's supporters suspect.

And that moment isn't far away. The Winklevoss Bitcoin Trust (BATS: COIN) exchange-traded fund is in the final stages of its SEC approval process. 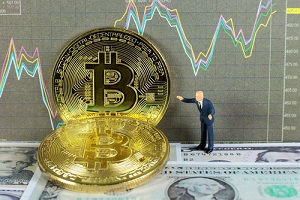 While it's still possible the SEC will reject the Winklevoss Bitcoin ETF, it's far more likely it will be approved. And the SEC must rule one way or the other by March 2017.

Related: Why the Winklevoss Bitcoin ETF Is Back on Track for Approval

Most of the Bitcoin community has assumed the approval of the first Bitcoin ETF will be a positive for the price of Bitcoin. That's because it will add to the legitimacy of the digital currency in addition to providing a new avenue for people to invest in Bitcoin.

But the history of other commodity-based ETFs suggests this event will be a major catalyst.

In the early-to-mid 2000s, ETFs launched for a wide range of commodities, including gold, silver, platinum, copper, oil, and natural gas. In just about every case, the price of the underlying commodity shot up in the years following the debut of ETFs based on that commodity.

Because of their historic use as currency, the best examples to look at when considering the impact of a Bitcoin ETF are gold and silver...

Why the First Bitcoin ETF Will Be a Game-Changer

Typically precious metal ETFs, such as the SPDR Gold Trust (NYSE Arca: GLD) and the iShares Silver Trust (NYSE Arca: SLV), are backed by the physical commodity. That means that as investors buy shares of the ETF, the fund managers need to buy corresponding amounts of the underlying commodity.

So once the Winklevoss Bitcoin Trust launches, it will need to purchase Bitcoin to back the shares it has sold to investors. This fresh inflow of capital will kick the price of Bitcoin higher.

That's what happened with both gold and silver when those ETFs debuted more than a decade ago.

"Retail and equity investors, who wouldn't or couldn't go direct to the commodity markets, were prepared to invest in these vehicles. That in turn sucked physical commodity, used to back the ETFs, out of the markets in question, leading to price appreciation," wrote Daniel Masters, director of the UK-based Global Advisors Bitcoin Investment hedge fund, in a blog post last month. Masters also served for six years as the global head of energy trading for JPMorgan Chase & Co. (NYSE: JPM).

"It has to be emphasized that the capital that flowed in was not doing so in some repackaging exercise, but was fresh, previously unseen capital," Masters said.

Take a look at the dramatic impact the launch of ETFs had on gold and silver prices... 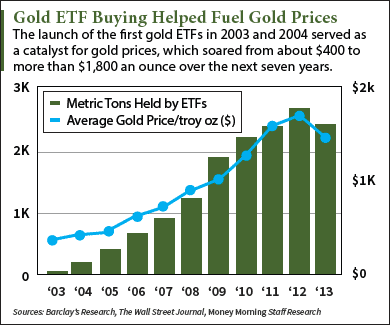 Silver followed a similar pattern. The iShares Silver Trust debuted in April 2006. But in silver's case, some of the big gains came before the IPO of SLV.

Anticipation of the increased demand from a silver ETF had panicked industrial customers of silver. The Silver Users Association even lobbied the SEC to reject the silver ETF. Meanwhile, silver prices rocketed.

While Bitcoin isn't a physical commodity like gold or silver, the Commodities Futures Trading Commission (CFTC) classified Bitcoin as a commodity last year, and it can be used as a currency.

So a Bitcoin ETF should mimic the price-doubling impact of GLD and SLV.

In fact, the first Bitcoin ETF might pack even more of a punch than its precious metals counterparts.

That's because a lot of potential Bitcoin investors have been sitting on the sidelines. They're understandably wary of buying Bitcoin directly from exchanges that have had a history of getting hacked with millions of dollars' worth of bitcoins stolen.

A Bitcoin ETF presents a safer, more conventional option that will likely pull millions of dollars of new money into the Bitcoin markets. That will have a huge effect because 1) the Bitcoin market is far smaller than the markets for gold and silver; and 2) the supply of Bitcoin is designed to shrink over time.

The Bitcoin price is currently hovering around $625. So a leap into the $1,200 to $1,500 range in the years immediately following the launch of the Winklevoss Bitcoin ETF may actually underestimate Bitcoin's potential.

Next Up: The volatility of the price of Bitcoin is well-documented, but over the past three years it has done something else that will shock most investors. This is why it's a mistake to overlook Bitcoin as an investment...

I don't follow SLV but this is highly questionable in GLD's case. Paper gold GLD claims to be fully backed by physical gold bullion but yet it refuses to give retail investors the right to redeem for any of these ‘claimed’ gold bullion. This fact alone would mean GLD shares are nothing more than paper at the end of the day. Furthermore, GLD’s prospectus is chalk full of weasel clauses and legal loopholes that allows the fund to get away without the full physical gold backing. One good example of this is the clause that states GLD has no right to audit subcustodial gold holdings. To this day, I have not heard of a single good reason for the existence of this audit loophole. I’ve also verified the following to be true and welcome everyone else to do so:

"Did anyone try calling the GLD hotline at (866) 320 4053 in search of numerical details on GLD's insurance? The prospectus vaguely states "The Custodian maintains insurance with regard to its business on such terms and conditions as it considers appropriate which does not cover the full amount of gold held in custody." When I asked about how much of the gold was insured, the representative proceeded to act as if he didn't know and said they were just the "marketing agent" for GLD. What kind of marketing agent would not know such basic information about a product they are marketing? It seems like they are deliberately hiding information from investors.

I remember there was a well documented visit by CNBC's Bob Pisani to GLD's gold vault. This visit was organized by GLD's management to prove the existence of GLD's gold but the gold bar held up by Mr. Pisani had the serial number ZJ6752 which did not appear on the most recent bar list at that time. It was later discovered that this "GLD" bar was actually owned by ETF Securities."

Per the chart above it took over 3 years for the price to 'skyrocket' (er. double).. maybe that has less to do with the ETF and more to do with the global economy no?? Correlation is not causation and that's more true over a longer period of time where there are growing variables. Weak sauce article.