Update 9 a.m. March 8: The Bitcoin price is falling again today (Wednesday) because of a flurry of announcements from the three biggest Chinese Bitcoin exchanges.

According to the CoinDesk Bitcoin Price Index, the price of Bitcoin fell to a low of $1,164.70 at about 2 a.m. Eastern Standard Time, a 6% drop from the $1,240 level where it had been trading just five hours earlier.

The Chinese Bitcoin exchanges were reacting to yesterday's comments from a People's Bank of China (PBOC) official.

They each issued statements to remind customers that the Feb. 9 ban on Bitcoin withdrawals will remain in effect until Chinese regulators decide otherwise.

Although this isn't a change in policy, the original announcement suggested the restriction on withdrawals was a temporary measure. The reminder sparked concerns the ban will last longer than first believed.

The Bitcoin price is falling  today because of jitters over comments by an official of the People's Bank of China (PBOC).

The price of Bitcoin fell nearly $100 early today (Tuesday), with the CoinDesk Bitcoin Price Index dropping about 7% from $1,275 to below $1,188 in about three hours. 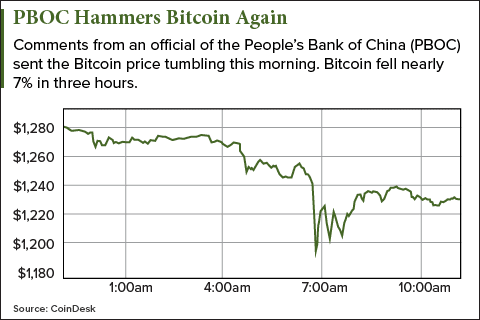 The PBOC's director of its Business Administration unit, Zhou Xuedong, said China's central bank should consider "blacklisting" Bitcoin exchanges that violate PBOC rules. He also said the PBOC should look at regulating the country's Bitcoin exchanges at the national level, including a possible requirement for licenses.

This isn't the first time the PBOC has knocked the price of Bitcoin down...

When the Bitcoin Price Is Falling, Fingers Point to the PBOC

In early January, following news that the PBOC had sent "inspection teams" to the Chinese Bitcoin exchanges to ensure they were adhering to PBOC regulations, the Bitcoin price fell by $400 over a one-week span.

The Bitcoin news today out of China wasn't all negative, though. Xuedong also said that the PBOC needed to spend time studying the Bitcoin exchanges with the goals of "upgrading the mechanisms of regulation and cooperation, strengthening the self-discipline of the industry, and building a credit system for the Bitcoin exchanges."

In other words, worries about the PBOC "cracking down" or banning Bitcoin appear overblown. The PBOC clearly wants to remain in control, but just as clearly grasps the value of allowing Bitcoin trading to continue.

That may be why the Bitcoin price began to rebound today shortly after its sudden fall. By midmorning, the price of Bitcoin had recovered to about $1,235, but faced continued volatility.

Another factor that may have helped prop up the Bitcoin price is the imminent decision by the Securities and Exchange Commission (SEC) to approve or deny the Winklevoss Bitcoin ETF. The deadline for that decision is Saturday.

Anticipation of SEC approval of the first Bitcoin ETF is a major reason the Bitcoin price has shot up 60% over the past three months, although approval is anything but certain.

Despite the short-term gyrations in the price of Bitcoin, over the long term the digital currency is expected to continue rising in value.

Last December, I talked to 11 top influencers about where they thought the Bitcoin price would be at the end of 2017. Their answers may surprise you...