The Pentagon is trying to fool us again.

Just like it tried to play down North Korea's missile launch on Feb. 12 by claiming Pyongyang's test that day "did not pose any serious threat to the American public."

Money Morning Executive Editor Bill Patalon, who's been covering and studying developments within the "Asian arms race" for nearly three decades, told Money Morning readers precisely why they shouldn't fall for it… 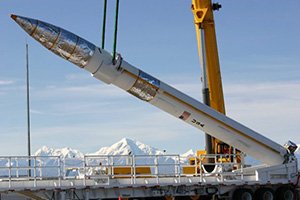 A ground-based interceptor missile being installed at the Missile Defense Complex in Fort Greely, Alaska, July 2006.

The agency's response to the launch, Patalon wrote to his Private Briefing subscribers on Feb. 23, "wasn't exactly 'the whole truth.'"

"The Pentagon probably should have appended the phrase 'at least not yet' to its sweeping dismissal," he admitted.

Patalon then explained that the agency knew full well that Pyongyang was hard at work developing "never-before-seen" weapons technology to add to their missile launches, but wasn't copping to this knowledge.

"North Korea's early February launch used something called a 'cold eject' launch system. In other words, compressed air or compressed gas is used to 'fling' the missile on its way – before the rocket engine ignites."

[Editor's Note: Patalon has been warning his Private Briefing readers for years now that the U.S. has generally underestimated the threat from North Korea's nuclear and ballistic missile programs. And he's made prescient calls on three stocks that have been consistent performers but that should soar once reality "catches up" with American policymakers. Patalon is expecting that any day now…]

With notably self-assured overtones, the Pentagon announced that in May it will begin conducting tests on the U.S. military's ability to shoot down any future intercontinental ballistic missiles (ICBMs) launched toward American soil.

Now, not only does the agency want us to believe our enemies don't have advanced weapons, it also wants us to think our own technology is capable of destroying any future incoming threats — which simply isn't true.

At least, not according to this recent report about the military's true "ability" to shield the U.S. homeland…

What the Pentagon Doesn't Want Us to Know…

You see, in July 2016, the Union of Concerned Scientists (UCS) – a nonprofit, non-partisan science advocacy organization based in the United States – issued a report on the Pentagon's Ground-Based Midcourse Defense (GMD) system.

Revealed: The Pentagon’s Plan to Stop a Chinese Sneak Attack Dead in Its Tracks 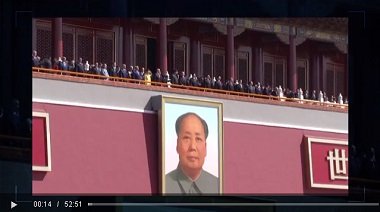 The GMD – which was deployed from the United States to stations all over the world in 2003 (Australia, Greenland, the UK, Japan, and Southeast Asia) – is designed to intercept incoming missiles by launching projectiles of its own to intentionally collide with airborne weapons and destroy them.

First activated in 1999, the GMD has cost the U.S. government a whopping $40 billion to build, maintain, and test in the years since.

But the UCS declared it largely ineffective on July 19, 2016…

In fact, not only did GMD interceptors fail to collide with mock targets amid rounds of tests conducted over the years, it failed to do so most of the time: 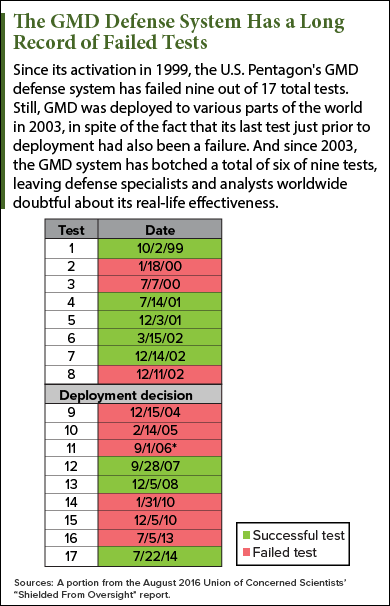 The UCS' report last July also called for the U.S. Pentagon to halt its GMD installations until the system's technical errors were fixed.

But the Pentagon shrugged off the report. It said the system was "sufficiently effective" – aka "reliable enough," according to watchdog group Project on Government Oversight (POGO) on Aug. 8, 2016.

Uncle Sam's denial, however, was at least an acknowledgement of the GMD's possible problem.

Prior to this repudiation, the agency had flat-out refused to respond to the mainstream media's questions about the GMD system's failures at all…

The Pentagon Had Already Shut Out Mainstream Media

In January 2016, The Los Angeles Times had attempted to conduct its own investigation into the system's effectiveness. That month the media outlet asked a federal judge to order the Pentagon to release the information on the system's various tests.

The Pentagon claimed the records were exempt from disclosure under the Freedom of Information Act (FOIA), and asked the judge to dismiss the case.

But in court documents later obtained by The L.A. Times, the Pentagon had called the outlet's initial request "defective" and said the newspaper had not "exhausted their administrative remedies."

In response to the Pentagon's secretive nature about the GMD's performance, the UCS' report last July likewise called Uncle Sam's failure to be honest with the media "both cynical and a disservice to the public."