During an interview on CNBC's "Squawk Box" this morning (May 17), former CEO of General Electric Co. (NYSE: GE) Jack Welch issued a dire warning about the U.S. stock market's future: 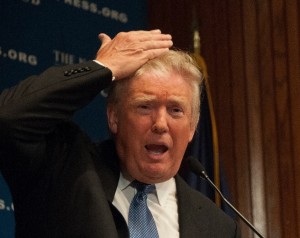 President Donald Trump's impeachment may be coming, and it's going to have a devastating effect on the stock market.

"An impeachment proceeding would blow the market away," Welch said.

Welch also said Trump's firing of James Comey as FBI director was a "rookie mistake." "You don't make any friends doing it the way [Trump] did it," Welch added.

"I think without question we have a guy that's on the right agenda with crappy management practices," Welch said after giving the president a "D -" on his management skills.

Welch's commentary pertains to how Trump fired Comey; meanwhile, the mainstream media's focusing on why Trump fired him. It's airing comparisons to the Watergate scandal that ultimately drove former President Richard Nixon out of the Oval Office.

"There are some eerie parallels between now and that time," said New York University financial historian Richard Sylla on May 15.

And the parallels aren't just limited to the politics - they can be seen in the markets as well.

This leaves the question, if the ups are similar, what will the downs look like? Here's a glimpse...

Must Read: Will Trump Be Impeached?

"The Dow ended up losing something like more than 40% of its value from the peak [from early 1973 to October 1974], which occurred right after Nixon's reelection," Sylla said. "This would qualify as a major market down-move."

In fact, some analysts are speculating that Trump's affairs may lead to an outcome even worse than that of the Watergate scandal.

"I think this is a potentially more dangerous situation than Watergate and we're at a very dangerous moment," said Carl Bernstein, who reported on Watergate, to CNN May 14.

However, even if the markets take a nosedive from all of this political brouhaha, you'll want to stay in.

Investors: You Have to Be In It to Win It

When investors hear the word "correction" or "crash," they often rush to sell it all.

However, Money Morning Chief Investment Strategist Keith Fitz-Gerald, a 35-year seasoned market analyst and one of the only experts to see the financial collapse of 2008 ahead of time, has this advice: don't even think about it.

You see, every time the headlines get clogged with bad news, markets experience massive sell-offs because investors are scared and uncertain.

Fun Fact: One of Our Experts Helped Create the VIX

In the early '80s, when Shah was running a hedge fund from the floor of the Chicago Board Options Exchange (CBOE), he was a market maker in OEX options. The OEX is the Standard & Poor's 100 Index. The CBOE Market Volatility Index (VIX) was born from trading options on the OEX and from Shah's desire to more accurately price risk.

Now, Shah provides Members with valuable insider information about the activities of Wall Street -- what's happening, who is involved, and how to profit.

Indeed, the CBOE Volatility Index - largely referred to as the market's "fear gauge" -- is set to reach its highest level in over eight months today as investors react to the latest political turmoil.

But when the market is down, "[Selling] is perhaps the single worst (and most expensive) mistake an investor can make," said Keith to readers on March 9. "Contrary to what a lot of people believe, you don't have to 'sell everything' to play along."

"Buying and selling is not the black-and-white decision Wall Street wants you to think it is," said Keith. "In fact, trying to be 'all in' or 'all out' is a fool's errand better suited to Las Vegas and back-alley fortune tellers."

Instead, Keith recommends investors make subtle adjustments that still keep you in the game -- and aligned with the remaining profit potential.

"The way I see it, no investor has to suffer the ravages of a declining market, especially when there are easy, inexpensive, and limited-risk ways to turn falling prices into profits," said Keith.

Here are three of his favorite plays...

You must have worked for the garbage networks, CNN, MSNBC, ABC, NBC, CBS, etc. as you continue with the Trump bashing. If I wanted to read this kind of garbage I could get it for free at Yahoo, Huffington Post, etc. This is feeding into the liberal hysteria and eroding your credibility Money Morning!

If Trump were impeached and convicted in the Senate Pence would become
Pres. Since Pence holds similar views re Taxation and a far higher probability
of working with Congress and actually passing tax reform IMHO the stock market would go up at least 10%.

Yet recent events, where a reporter lied and implied that Trump would soon be removed, prove this wrong. Immediately when that came out, stocks dropped 150+ points. Immediately after it was exposed as a lie, or "Misunderstanding," as the reporter tried to claim, the stock immediately recovered.

So it appears they would indeed crash if that occurs if that is any indication.