Remember those soaring profits that propelled the stocks of health insurers to record highs starting in 2013?

Like how UnitedHealth Group Inc. (NYSE: UNH) hit an all-time high in June 2013 and never looked back? From January 2013 to January 2016, UNH stock nearly tripled the performance of the Standard & Poor's 500 Index.

Humana Inc. (NYSE: HUM) fared even better, hitting an all-time high in September 2013. In that same three-year period HUM stock more than quadrupled the gains in the S&P 500.

Turns out those same health insurers fattened their profits with a lot of help from a years-long strategy to defraud the Medicare Advantage program.

And since Medicare derives its funding from the government, these health insurers have essentially been stealing money from you, the U.S. taxpayer, for their own gain.

And gain they did, to the tune of billions ...

"There Was No Way They Could Lose"

The poster child for this scheme is UnitedHealth Group, the nation's largest insurer. And as the biggest provider of "Medicare Advantage" plans (nearly 4 million enrollees as of December 2016), UnitedHealth stood to benefit the most.

According to a U.S. Department of Justice lawsuit filed May 16, between 2010 and 2015 UnitedHealth siphoned off about $3 billion in taxpayer money by overbilling Medicare Advantage. But the pattern of overpayments dates back as far as 2006.

"As the nation's largest Medicare Advantage organization, UHG received substantial overpayments based upon untruthful and inaccurate information about the health status of those enrolled in its plans," said Acting U.S. Attorney for the Western District of New York James P. Kennedy Jr. in a Justice Department statement. "Such fraudulent spending of taxpayers' dollars will not be tolerated." 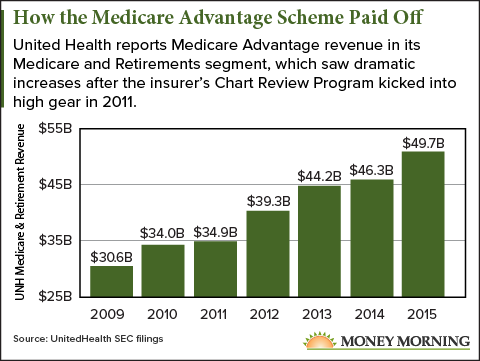 The suit is based on the allegations of whistleblower Benjamin Poehling, a former finance director for UnitedHealth who worked there from 2002 to 2012.

"They've set up a perfect scheme here," Poehling told The New York Times. "It was rigged so there was no way they could lose."

UnitedHealth disputes any wrongdoing. A UNH spokesman told the Times that his company "complied with the government's Medicare Advantage program rules," while criticizing the policies of the Centers for Medicare and Medicaid Services (CMS) as "murky."

UnitedHealth is the only insurer named in the suit, but the Justice Department is investigating several other leading insurers for the same kind of Medicare Advantage fraud.

A prior complaint, filed in 2011, listed Aetna Inc. (NYSE: AET) and Humana Inc. as defendants. Humana has the second-highest number of Medicare Advantage enrollees, 3.21 million.

Other health insurers could be caught in the Justice Department's web through acquisitions of companies named in the 2011 complaint: Centene Corp. (NYSE: CNC) via its 2016 merger with HealthNet, and Cigna Corp. (NYSE: CI) through its 2011 acquisition of Bravo Health-parent HealthSpring.

That so many health insurance companies have come under scrutiny speaks to how easy it was to cheat the Medicare Advantage program - and steal more money out of taxpayer pockets.

Here's what the insurers were doing...

How the Health Insurers Poached Your Tax Dollars

When Medicare Advantage was created 14 years ago, it made private health insurers like UnitedHealth middlemen between beneficiaries and the government.

Under Medicare Advantage, the government reimburses insurers a base rate for each member it enrolls. But certain medical conditions, or combinations of medical conditions, can increase the reimbursements. The idea was to prevent the insurers from targeting only the healthiest (and thus most profitable) prospects.

But the idea backfired. Paying extra for a variety of conditions created an incentive to exaggerate a member's health problems to increase reimbursement rates.

Take, for example, a typical male beneficiary between the ages of 70 and 74. The base payment to an insurer for such a patient in Medicare Advantage is $3,866 per year. But tacking on health conditions can inflate the annual payment to multiples of that amount.

The trick was finding the patients with conditions conducive to this scheme. And technology had the answer in Big Data.

The insurers used complex data-mining programs to identify patients with conditions that could be "enhanced" without raising government suspicion.

Staff would then examine the medical records in a process called "risk scoring," in what amounted to a treasure hunt for profits at the government's expense.

If the process happened to show that a patient had an unsupported diagnosis, UNH was obligated to delete it. But since that would mean less money for UnitedHealth, the company disregarded such information.

The potential of this process -  the so-called "chart review program" - to fatten the company's bottom line quickly became apparent...

We are better served the free competition and let all the company fighting and the best win. Same for executive competition will always give the best result. Government shouldn't intervene and spend taxpayer money to regulate. We should cut all the foolish spending. Look everywhere around the world with universal coverage it cost a lot more to get worst outcome. Isn't it right???