The Bitcoin price had another volatile week that included reaching an all-time high and a withering tweetstorm from famed investor Mark Cuban. 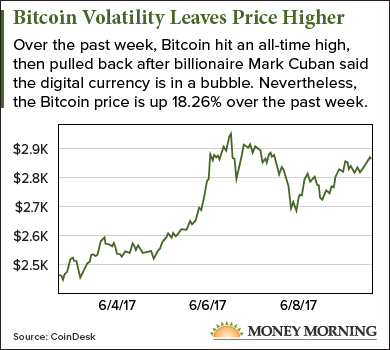 As often happens with Bitcoin, the price didn't stick around its all-time high for long...

Why the Bitcoin Price Fell After Peaking at $2,967

A couple of hours after Bitcoin hit the all-time high, Cuban let loose this tweet:

I think it's in a bubble. I just don't know when or how much it corrects. When everyone is bragging about how easy they are making $=bubble https://t.co/hTrV5DeWNd

The bubble talk sent the price of Bitcoin into a tailspin. The Bitcoin price fell to $2,742.33 before rebounding into Wednesday. But the slide resumed by midday Wednesday, sending the Bitcoin price as low as $2,625.08. It was a loss of 11.54% in little more than a day.

But investors shouldn't let the unusually volatile Bitcoin price action this week distract them from the bigger picture...

Why the Bitcoin Price Has Been Rising So Quickly in 2017

That's because the Bitcoin price has several powerful catalysts pushing it.

That includes the legalization of Bitcoin in Japan, a policy reversal in Russia from anti-cryptocurrency to pro-cryptocurrency, the trend of initial coin offerings (which must be purchased with Bitcoin or Ethereum), and more money coming into Bitcoin from institutional investors.

These factors were at play as the price of Bitcoin soared earlier in the week.

Pullbacks have occurred on negative news or profit-taking, but each time the price of Bitcoin has bounced back to reach new highs. This week's run to a new all-time high was preceded by a 31% drop.

This is why long-term Bitcoin investors haven't panicked (or gotten overly excited) in the past few months as the price of Bitcoin has rocketed and sunk. Over the long term, the Bitcoin value is bound to increase as demand keeps rising and the supply of newly mined coins shrinks.

Now here's what investors can expect from Bitcoin next...

Where the Price of Bitcoin Is Headed Now

nothing will stop BITCOIN OR ETH Watch it run ! Also an alternative to gold & silver I believe !