That's because a powerful combination of factors is driving the price of Bitcoin higher.

The catalysts driving this rally are so strong that they've overcome several issues that should be holding the Bitcoin price back, such as a long-running debate on how best to scale the network to accommodate the increasing number of transactions and the high-profile rejection of the Winklevoss Bitcoin ETF by the U.S. Securities and Exchange Commission in March. 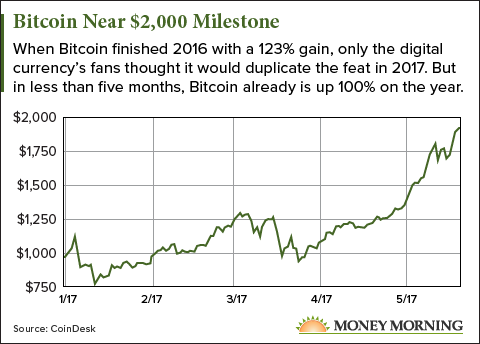 When I wrote about why the Bitcoin price was rising in January, I mentioned the halving of the block reward last July from 25 bitcoins to 12.5 bitcoins, among other things.

But as the Bitcoin price has continued to surge in the weeks since, several additional catalysts have become apparent...

New Catalysts Helping Push the Price of Bitcoin Toward $2,000

One immediate cause for the rapid increase in the Bitcoin price over the past week is the same one that caused the stock markets to tank on Wednesday: the never-ending turmoil of the Trump administration.

The uncertainty over whether President Donald Trump will at some point be impeached, as well as how effectively he can govern with a rising number of dark clouds hanging over his administration, has made markets the world over nervous.

Add in the concerns over China's actions in the South China Sea as well as the bellicose behavior of North Korean dictator Kim Jong Un, and it's no wonder traders are moving into safe-haven investments such as gold, silver, and Bitcoin.

Another immediate catalyst has to do with Litecoin, one of Bitcoin's hundreds of cryptocurrency cousins. Litecoin this month successfully activated a change to its coding that allows its network to process more transactions per minute.

The change is very similar to one proposed by a segment of the Bitcoin community to partially solve the network scaling impasse. The successful implementation has given hope that Bitcoin will be able to do it, too. Plus, it showed the Litecoin network may be able to serve as way to test other proposed scaling solutions.

Beyond those immediate factors driving the Bitcoin price, a few longer-term catalysts have emerged...

Why the Bitcoin Price Will Keep Rising in 2017

As I type we just crOsseo another ATH 2300 amazing gains this year alone. What are your thoughts on the scaling debate? Will segwit be adopted and if this is settled on I think we can forget about the moon, we are going to pluto!

Thanks for reading Money Morning. I personally would like to see SegWit adopted as way to buy time for the devs to cook up a better solution that will speed up transaction times as well as increase the number of transactions the network can process. Both are needed if Bitcoin is to continue growing. I'm encouraged that the debate is now more about how to do it rather than whether it should be done. I'm hoping the community will agree on something within the next 12 months, because if it drags on any longer you'll see people abandoning Bitcoin for other cryptos.

And I agree that if/when this issue is settled, the Bitcoin price will skyrocket far beyond what we've already seen.

your welcome i appreciate your articles. It appears an Aug 1 kickoff for segwit appears to be the news around the community. I agree glad they are coming to a consensus on what needs to be done!