Illinois has a pension problem - and it's not alone.

In fact, four states in America are in dire financial straits: Illinois, Massachusetts, Connecticut, and New Jersey. These four states owe impossible amounts to former and future government employees, and Illinois is leading the pack.

In fact, government worker pensions in Illinois consume a whopping 25% of the state's budget - roughly $32.5 billion. For comparison, California, a state with 26 million more residents than Illinois, spends only 16% of its budget on pensions.

Analysts are now calling these states the "four Greeces of the United States" because of their massive debt loads. 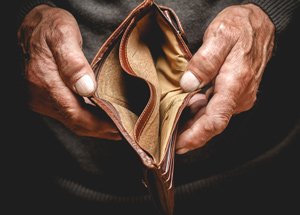 And the markets are getting worried...

Major credit agencies, such as Moody's Investors Service and Fitch Ratings Inc., have downgraded the credit ratings of these debt-ridden states. In April, Illinois received the lowest credit rating in the nation - just one notch above junk status.

Now government workers are finding themselves trapped in state and city pension systems, forced to pay into broken pension funds from which they may never see benefits.

And the taxpayers are going to suffer the most...

Illinois Is the Poster Child of Pension Crisis

Illinois' pension problems are among the worst of the four states, and they have the potential to spark nationwide financial chaos.

Ultimately, Illinois' crisis can be boiled down to the state going two years without a budget. And even when it did, that budget was unbalanced for nearly 15 years - while pension costs grew unsustainably.

The skyrocketing pension costs were a direct result of overgenerous pension benefits and political manipulation, according to a report from the Illinois Policy Institute. In fact, from 2000 to 2015, legislators increased spending on pensions by nearly 586% - an increase unseen in any other portion of its spending.

According to the same report, 53% of state retirees in Illinois can expect to receive lifetime pension benefits of more than $1 million. Almost 40,000 (18% of all retirees) will receive $2 million or more in benefits. By contrast, private-sector workers with average Social Security benefits will only receive approximately $400,000 in lifetime benefits. That's less than half of what most Illinois pension-holders receive.

Even worse, the state politicians have been using the pensions as a political slush fund starting as far back as 1994, when former Illinois Gov. Jim Edgar enacted legislation that pushed state pension contributions until 2045. Since then, Illinois politicians have borrowed, skipped payments, and taxed their citizens to fund pensions rather than seek comprehensive reforms, according to the report.

As a result, the state's pension shortfall has skyrocketed to $111 billion.

You see, assets in the pension systems will be insufficient to pay for the pensions of current public employees and retirees, according to a research report from the Hoover Institution. That means taxpayer dollars will eventually have to make up the difference.

But here's where the real problem lies...

Across the country, state budgets have been hurting since the recession. According to the Government Accountability Office, state tax revenue won't reach pre-2007 levels until 2047. In other words, the very tax money states like Illinois need to recoup their massive pension shortfalls just isn't there.

"U.S. states and their pension systems could be the crisis that ends the U.S.' safe-haven status. And with it, the end of financial stability," reported Southbank Investment Research on June 8.

The Social Security Trust Fund Has No Money in It

Climbing out of this fiscal hole will be a long and painful process for these states - it may even be impossible. But you could take steps to protect yourself from the chaos - even if you don't live in one of these four states...

Protect Your Money with 26(f) Investments

When governments mismanage budgets and overspend, it's your money that's jeopardized.

This is where 26(f) programs can help. These unique investments can serve as shelters because they're not run or monitored by the U.S. government. These programs also offer a way to earn aggressive monthly profits on top of lump-sum payouts.

Money Morning Chief Investment Strategist Keith Fitz-Gerald - whose focus is always on how to keep your money safe - is a seasoned market analyst and professional trader with more than 34 years of experience. He's put together a complete 26(f) program action plan exclusively for our readers.

This report highlights how you can "enroll" in these programs as a way to protect your money from the states' failures. Click here to learn how to receive your free copy now.

This has been corrected in the text. We apologize for the error. Thanks for letting us know!

Sounds like some people should be brought up for investigation. Pension funds are not to be used for any other purpose. Basically they should have been put in that proverbial lock box, not to be touched!