The gradual decline started when silver prices saw a 1.3% flash crash in tandem with gold's quick 1% drop, then climbed into mid-week, only to give it all back at the close of the month.

With this short-term perspective in mind, it would be easy to think the price of silver isn't making progress.

But to a trained eye, silver's short- and medium-term price action is looking constructive.

Despite silver being down 6.9% since the June 14 U.S. Federal Reserve rate hike, it could be putting in a final capitulation sell-off, a big indicator that everyone who plans to sell their silver has already done so. In my view, silver's experiencing a bullish consolidation as it builds momentum for a move higher.

Before I show you why, here's a closer look at silver's price movement since June 26…

Trending: The Ultimate Guide for Silver Investors in 2017 – Free

If you look at this chart here, you'll see how volatile the DXY was that Wednesday… 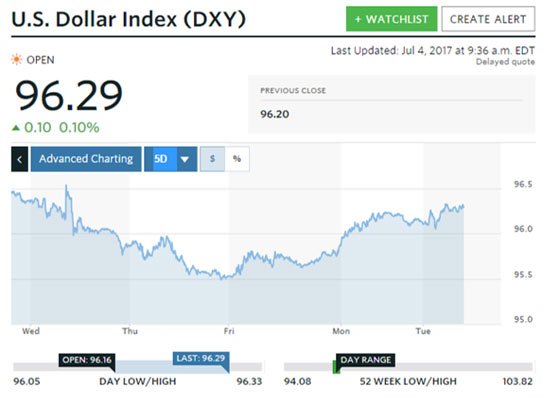 But the price of silver saw volatility again on Thursday, June 29, despite a continued sell-off of the dollar. Other than a small rally to bump up against resistance at 96, the DXY spent the day trending downwards. Meanwhile, silver saw a 1.1% sell-off from the previous $16.78 close to $16.59 by the end of the day.

While the U.S. stock market was closed for the Fourth of July on Tuesday, silver was trading and continued its trend lower. It declined 0.4% to close the session at $16.05.

The biggest silver price movement happened yesterday (Wednesday, July 5) as the metal fell through the psychologically important $16 level for the first time this year. It dropped 1.3% to close at $15.84 – the lowest since silver's $15.99 close on Dec. 30, 2016.

And despite a slight rebound in the silver price today (Thursday, July 6), it's still hovering at its lowest levels of the year. The metal is up 0.8% today to $15.96.

So, with all of this volatility over the last week and a half, what is it about silver's recent action that justifies my bold 37.8% predicted price gain?