There's no shortage of traditional market predictors in use today.

Analysts study metrics such as GDP growth, unemployment rates, and historical inflationary patterns - just to name a few - in an effort to make accurate predictions about future market movements. 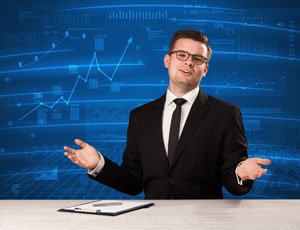 There are also plenty of non-traditional market predictors in use today.

And these indicators are based on some pretty bizarre metrics. Think butter sales in Bangladesh and average skirt length.

And though these strange market predictors may be uncannily accurate at times, they're more based on correlation than causation. As they say, even a broken clock is right twice a day...

That's why we believe it's best to leave the market pattern hunting to the seasoned pros with reliable track records.

In fact, Money Morning Capital Wave Strategist Shah Gilani has one of the best track records in the business, based on meaningful calculations and years of market savvy - not random, dangerous guesswork.

And we'll tell you all about it.

But first, check out five of the strangest market predictors out there...

For example, one popular unconventional market predictor is called the "Buttered Popcorn Index."

The concept for this indicator is based in pure escapism. It theorizes that consumers will flock to the movies when economic times are tough, in order to escape reality for a while. They'll even do so, according to this predictor, no matter a film's ratings or reviews.

Sure enough, box offices did actually post one of their biggest profits in years in January 2009, according to BoxOfficeMojo.com - a time when the markets were at their worst during the Great Recession.

Movie theaters in the United States enjoyed their first billion-dollar January ever in 2009, as overall profits rose 19% to $1.03 billion - despite that month's "mediocre" movie selection and lack of critically acclaimed releases, The Guardian reported on Feb. 2, 2009.

But while these stats may infer that the Buttered Popcorn Index is a reliable market predictor - and that cinema stocks are a good hedge against a stock market crash - it's dangerous to truly think so.

In the case of the Buttered Popcorn Index, the danger lies in assuming that human behavior will repeat itself. Movie ticket sales, on average, have gone up roughly 15% per year since 2009 - as have many other goods and services commonly associated with "date nights" or "one-evening" outings. So who's to say the American public would be willing to make that splurge again during the next economic downturn?

Weird Market Predictor No. 2: The "Butter in Bangladesh" Theory

This indicator was first introduced in a paper published two decades ago by analysts David Leinweber and Dave Krider at investment management firm First Quadrant Corp.

Leinweber and Krider found that butter production in Bangladesh had the tightest correlation to the S&P 500 of any other metric they studied. And obviously they studied several.

They found this correlation specifically by...

That's right. The two analysts were trying to identify a non-financial database of statistics to correlate to stocks, and they simply guessed at various metrics until they found one that worked. (They'd already tried correlating the U.S. population of nine-year-old kids to the index - without success.)

Their subsequent "Bangladesh Butter" theory supposed that by calculating a prior year's percentage change in Bangladeshi butter production and multiplying it by two, you'd come up with the percentage by which the S&P 500 Index will change in the year ahead.

Based on this theory, a 5% Bangladeshi butter production increase in 2017, for example, would mean a 10% hike in the S&P in 2018. The same statistics would hold true on the downside, as well.

The authors of the 20-year-old paper weren't quack analysts, either. In fact, they completely understood that the correlation they just happened upon was a random coincidence. Still, they published their findings to make a point (that market movements in the past can be correlated to anything if you look hard enough) and to get some laughs.

For some investors unaware of the joke, however, the theory is still being used - or trying to be used - today. Leinweber told Forbes in July 2012, "I still get the occasional call asking for the current butter figures."

This market indicator was devised by economist George Taylor in the 1920s and was designed to predict the markets based on the length of women's skirts and dresses.

It went like this: The shorter the average woman's hemline, the better the economy will be in the future.

This theory may seem obsolete these days, nearly a century (and a million fashion trends) later. But in 2010, two quantitative analysts from Switzerland didn't think so and went about testing The Hemline Theory for themselves.

Marjolein van Baardwijk and Philip Hans Franses found that on a larger time scale, Taylor's Hemline Theory appears to be accurate, and they discussed this in their 2010 report entitled "The Hemline and the Economy: Is There Any Match?" Franses and van Baardwijk's research specifically seemed to verify that economic cycles follow hemline lengths by about three or four years. Essentially, a short hemline today would mean a bullish market around the year 2021, according to the theory.

Proponents of the Super Bowl indicator believe that an investor should always root for a National Football League (NFL) team to win the Super Bowl.

Should an American Football League (AFL) team win the match, according to the theory, the markets are in for a near-term drop.

An incredibly rare gold anomaly is shaping up in the markets as we speak - one that has occurred ONLY twice in the past 20 years. And it's about to happen again. Details here...

There's also a slight caveat to the theory: Investors also need to root for an old-school NFL team, not an AFL team that became part of the NFL during the 1970s merger.

If this indicator sounds like it's based more in superstition than anything else, that's because it is.

Oddly enough, the "Super Bowl Winner Theory" has accurately predicted the Dow's movement following the big game 76% of the time since its inception by The New York Times sportswriter Leonard Koppett in 1978.

That's when Koppett observed that in 10 out of the 11 preceding years (or since 1967), the direction of the Dow was "predicted" by the outcome of the Super Bowl.

But for the record, we wouldn't count on that.

Much like the Women's Hemline Theory, the "Lipstick Theory" is based on consumer behavior.

In the wake of the Sept. 11 attacks in 2001, and as the U.S. economy deflated, Leonard Lauder - the chair of Estee Lauder Co. Inc. (NYSE: EL) - noticed that his company was selling more lipstick than usual.

About seven years later, in May 2008, NYT asked economists about the plausibility of Lauder's theory.

Richard DeKaser, the chief economist with National City Corp., a financial holding company and bank in Cleveland, told NYT that day that the Lipstick Index wasn't just plausible, it was "perfectly consistent with all kinds of economic theory."

While DeKaser's statement may be true, the fact that an unexpected surge in lipstick sales can plausibly be tied to "all kinds of economic theory" brings the Bangladesh Butter Theory findings back to mind - that market movements in the past can be correlated to anything if you just look hard enough.

Of course, there are anomalies in the markets - profitable ones - that can be tied to distinct causes, instead of random correlations

But it takes a well-trained and uncommonly scrupulous eye to spot them.

Money Morning Capital Wave Strategist Shah Gilani, who's been a maverick in the market for 35 years, has this distinct talent...

He has developed a series of calculations based on a company's balance sheet (NOT butter in Bangladesh) to determine if a company can pay its bills, and if not, how long it will take for the company to burn through every dollar it has.

And he just spotted one of the biggest anomalies to have ever occurred...

An Anomaly Worth 44% Average Gains... Per Day