Bitcoin prices today are climbing after two controversies subsided and investors gained more confidence in the future of the world's oldest and most valuable cryptocurrency. 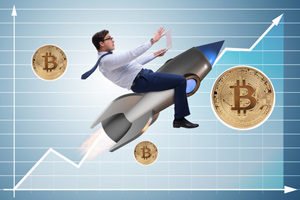 The swiftly climbing Bitcoin prices have raised hopes the digital currency will reach $4,000 or even $5,000 by the end of the year.

A segment of the Bitcoin community that wanted a different solution to the two-year-long debate over how to scale the network to accommodate the rising number of transactions created a new variant of Bitcoin called Bitcoin Cash. This version of Bitcoin can process blocks of transactions of up to eight megabytes, much larger than the one-megabyte limit on "legacy" Bitcoin.

Most people assumed – myself included – that a split this severe would create confusion and uncertainty among Bitcoin investors. The expectation was for high volatility and a drop in the price of Bitcoin. 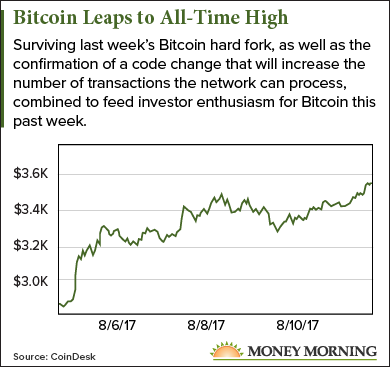 But the hard fork went more smoothly than anyone expected. Relief that the legacy Bitcoin version was left unharmed by the existence of Bitcoin Cash encouraged investors to buy.

A side effect of the hard fork also helped drive more money into Bitcoin.

Anyone who owned Bitcoin prior to the hard fork ended up with an equal amount of Bitcoin Cash after the fork. Many of those folks rushed to "dump" their windfall Bitcoin Cash by selling it in an exchange for legacy Bitcoin. The extra buying helped push up the price.

Meanwhile, the Bitcoin Cash price struggled to stay above $200 for several days. But so far it has withstood the "dumping" fairly well. As of today, Bitcoin Cash had risen to about $330.

Those who held onto both versions have enjoyed a 10-day combined gain of 44%.

But Bitcoin investors also had something else to cheer about…

SegWit2x is a solution to the scaling debate that was proposed in February using some coding tricks to squeeze more transactions into each one-megabyte block.

The week before the hard fork, Bitcoin miners signaled support for SegWit2x. But as a precaution, the SegWit2x proposal didn't "lock in" right away.

Related: How to Find the Best Bitcoin Exchange for You

That finally occurred this week. The prospect of a widely accepted solution to the scaling issue was taken as a major positive for Bitcoin. It was yet another green light to buyers.

The lifting of this headwind, along with the catalysts resulting from the hard fork, gave the price of Bitcoin one of its strongest boosts of the year.

But despite the air of celebration in many corners of the Bitcoin universe, a dark event lurks in the near future that could send prices spinning in the opposite direction.

Yet hardly anyone is talking about this…

The article is behind the curve and boring to read since anyone in the community already knows this.

Where is Bitcoin going? Who Accepts Bitcoin? Where Can I Use Bitcoin? (Airlines, Hotel's, Groceries). How can my business accept Bitcoin payments? Are Bitcoin payments for Every business? (with such slow transaction speeds). The World according to Bitcoin…