Threats between the two leaders – including Trump saying North Korea would be met with “fire and fury” and North Korea proposing to fire missiles at Guam – sent stock markets lower and the safe-haven silver higher. While the Dow Jones fell 0.2% after Trump’s comments on Wednesday (Aug. 9), silver prices climbed 2.9% from $16.39 to $16.86.

More importantly, silver is gaining even more than gold. If we look at silver versus gold in the past trading week, the price of silver’s gains more than doubled that of gold’s, with silver up 5% while gold was up only 2.3%.

After last week’s tremendous rally, I still think the silver price will keep pushing higher this year. Even if U.S. tensions with North Korea were to ease, I see one technical indicator emerging right now that could maintain silver’s current bull run in the coming months.

Before I dive into my silver price prediction for the rest of the year, here’s a recap of silver’s 5% rally last week…

After settling at $16.25 on Friday, Aug. 4, silver opened lower on Monday, Aug. 7, at $16.11. Prices recovered from that weak start and traded mostly in a narrow range throughout the session while the U.S. Dollar Index (DXY) climbed to 93.50. Prices eventually settled at $16.25 for a flat performance on the day.

The price of silver started gaining momentum on Tuesday, as it opened sharply higher at $16.36. The dollar and silver swung violently during the session, with the DXY gaining 50 points and dragging silver prices lower to $16.25 before both reversed course. By the close, the metal had reached $16.39 for a 0.9% gain.

Life-Changing Profits: This investing strategy has racked up 28 triple-digit wins so far this year – and 42 in the last 12 months. To learn how to get in position for the next one, click here now…

Silver’s rally continued on Wednesday, Aug. 9, when Trump’s “fire and fury” comment directed at North Korea sparked silver buying among investors. Prices started the day higher at $16.66 and moved higher on balance through the day. The dollar’s reversal pushed silver prices to close 2.9% higher at $16.86 by the end of the session.

Here’s a look at how the DXY trended last week… 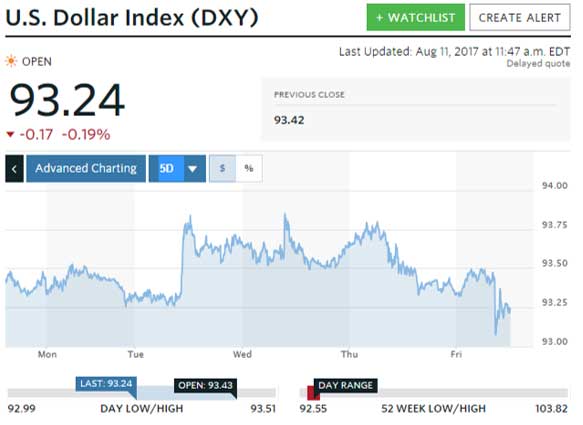 On Thursday, the dollar rolled over as the DXY peaked at 93.80 in the morning, before then dropping back to 93.40 by the afternoon. That helped lift the silver price higher, opening at $17.16 and falling to $17.07 by the end of the session. Although it was lower than the open, the $17.07 close still marked a 1.2% rise from the previous day’s close of $16.86. Thursday’s close was also the highest settlement for the metal since closing at $17.14 on June 14, nearly one month prior.

Trading calmed down a bit on Friday, Aug. 11, with the price of silver staying mostly flat despite the dollar falling toward the 93 level. Silver ended the day flat at $17.07 but also ended with a weekly gain of 5%.

As I said, silver’s performance last week bodes well for a continued rally in 2017, especially if we examine its performance relative to gold. And if we look at one of the most important technical indicators for the two metals, we might be able to see how much higher silver has to go this year.