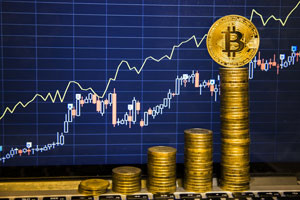 Bitcoin prices have been on a tear for the past week. Since hitting a low of $3,280.32 last Wednesday, the Bitcoin price has zoomed more than 32% in just five days.

The current rally extends a long winning streak for the digital currency, even accounting for the occasional correction.

Several Bitcoin price drivers I discussed last Friday have to do with developments in the Bitcoin world.

The biggest was relief over the successful execution of the Aug. 1 hard fork.

Related: How to Find the Best Bitcoin Exchange for You

A faction within the Bitcoin community wanted larger blocks – eight megabytes versus one megabyte – to address the backlog of transactions. After two years of debate, this group forked off their own "big-block" version of the cryptocurrency, now known as Bitcoin Cash.

Apprehension over this hard fork dissipated as the days passed and both versions thrived. That helped spark a "relief rally."

The hard fork also created a lot of wealth out of thin air that quickly made its way into Bitcoin. 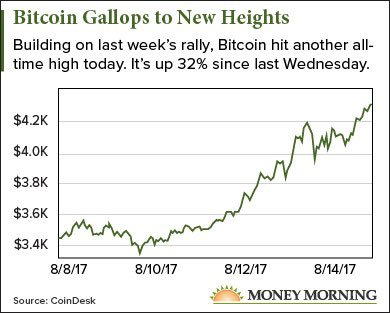 Anyone who held Bitcoin before the fork found themselves with an equal amount of Bitcoin Cash afterward. And many of those who opposed the fork promptly exchanged it for legacy Bitcoin, driving up prices.

Meanwhile, Bitcoin investors were also encouraged that an alternative solution to Bitcoin's transaction backlog problem, SegWit, locked in. Rather than increasing the block size, SegWit uses some technical gymnastics to shrink the size of each transaction, making room for 50% to 80% more transactions.

This expansion of capacity eased worries about the increasing congestion on the Bitcoin network, further encouraging investors.

I've often said that Bitcoin is a valid safe-haven investment alongside the traditional gold and silver. And last week investors were flocking to safe havens as fears heightened over the possibility of a nuclear attack by North Korea.

Over the past week, investors in places that have the most to fear from North Korea – Japan and South Korea – were turning to Bitcoin.

One factor that inspired U.S. buying was the revelation on Aug. 8 of a strikingly positive comment in an FAQ on cryptocurrencies by Wall Street behemoth Goldman Sachs Group Inc. (NYSE: GS).

Urgent: Since April 28, Shah Gilani's Zenith Trading Circle subscribers have had the opportunity to make average closeout gains of 83% (including partial plays) on his recommendations. You've got to check this out…

"Whether or not you believe in the merit of investing in cryptocurrencies (you know who you are), real dollars are at work here and warrant watching," the Goldman report said.

Then yesterday (Sunday), Goldman Head of Technical Strategy Sheba Jafari suggested the current Bitcoin rally could reach as high as $4,827 before pulling back.

Jafari drew attention earlier this year for accurately predicting in June – when Bitcoin was trading at about $2,700 – that the price of Bitcoin would fall to the $1,900 range, which it did in mid-July. She then set a target of $3,691, which Bitcoin has now surpassed.

Fair warning, though: Jafari also sees a correction dropping the Bitcoin price to as low as $2,221.

Other Wall Street analysts are far more optimistic, particularly as they look several years out.

Here's what they're saying about Bitcoin prices…

I followed Lou's recommendation on how to invest and the account is up $40 on $494 initial investment after all fees and transaction costs. See what happens.