South Korea has approved an $8 million aid package for North Korea in a move that may have surprised Kim Jong Un himself.

According to the country's Unification Ministry, the funds will go toward programs for infants and pregnant women. 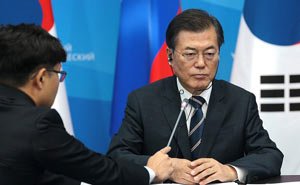 While the humanitarian gesture may help the neediest, most vulnerable populations in the Hermit Kingdom, Seoul's aid package is notably at odds with calls by Japan and the United States for unwavering economic pressure on Pyongyang.

Indeed, South Korea's care package will certainly have negative side effects that may transcend the intended altruism.

An estimated 18 million of North Korea's 25 million people require assistance due to food shortages and malnutrition, according to the UN.

The World Health Organization estimates the mortality rate among North Korean children under the age of five at 25 per 1,000, compared with three per 1,000 in South Korea.

Seoul Unification Minister Cho Myung Gyon claimed as much about the aid package for North Korea yesterday, justifying the Good Samaritan effort by saying there was "realistically no possibility" that any of the funds could be use by North Korean military because it does not include cash payments, The Guardian reported today.

Cho added that the government has "consistently said we would pursue humanitarian aid for North Korea in consideration of the poor conditions there among children and pregnant women."

But Larry Niksch, a Korea expert formerly with the U.S. Congressional Research Service, said $8 million is barely enough to have a significant impact on North Koreans in need.

What is worse, Niksch said, is that the Kim regime likely would snag a large portion of that small amount of assistance for its military, despite Unification Minister Cho's optimism.

"[Of] any food given to North Korea by WFP, at least 30% will be diverted by the regime to the military or the elite," Niksch said, according to VOA News yesterday.

Not only is the aid package unlikely to do quite as much good as South Korea would hope, but it may have negative diplomatic implications, as well.

Intentionally or not, the aid package shirks the intention of the harsh sanctions placed upon the regime by the United Nations.

Indeed, the whole point of the UN Security Council's unanimous vote on Sept. 11 was to put enough economic pressure on the Hermit Dynasty to force it to halt its nuclear ambitions.

And just today, U.S. President Donald Trump ordered new economic sanctions against any bank or other company doing business with North Korea. And, in a rare moment of actual cooperation, China has issued the same measures on its own financial institutions.

Still, according to Japanese Prime Minister Shinzo Abe, Moon's decision to carry on with Pyongyang's aid package undermines these joint efforts. The Japanese prime minister reportedly asked the South Korean president to reconsider the timing of the aid package in a recent telephone call, Reuters reported this a.m.

Yet some experts believe South Korea's aid package will yield a third result:

To serve as a calculated effort on Seoul's part to keep diplomatic channels open.

"By offering a token $8 million of humanitarian assistance to the UN, South Korea is signaling that it has not completely shut the door for engagement, humanitarian or otherwise," said Andrew Yeo, an associate professor of politics at the Catholic University of America, in Washington, according to VOA News.

In other words, the aid package for North Korea could be a bribe to get Pyongyang to the negotiating table. Though the likelihood of it working seems nil. South Korea proposed a peace treaty with the North on June 29, which Pyongyang flat-out ignored.

Nevertheless, myriad experts on the matter feel diplomatic talks are the only foreseeable way to avoid full-out war with the regime…

For instance, in June, former U.S. defense secretary under President Clinton, William Perry, said, "We don't want to engage in traditional warfare with Pyongyang because North Korea's end game could very well be a 'Hail Mary' nuclear bomb launched at the U.S."

"It is still a diplomatically-led effort," Mattis said on Sept. 19, according to Foreign Policy.

Money Morning Executive Editor Bill Patalon, who's been covering the Asian arms race for three decades, views South Korea's aid package as a "symbolic" gesture as well – and one that was made for the sake of diplomacy…

"It's symbolic, not substantive," Bill said today (Sept. 21). "And that symbolism cuts both ways."

Bill highly doubts that, if Kim Jong Un "sees missiles coming in, or a military threat, that he's going to stop and think, 'Well, they did just give us that $8 million, so maybe I won't use my artillery pieces to turn Seoul into a sea of fire after all.'"

He also thinks the Trump administration is unhappy with the symbolism, because it looks like yet another U.S. ally is "equivocating."

Indeed, "equivocating" is not a trait America is known for when it comes to geopolitical affairs.

Which is why, despite China's repeated threats, the U.S. military has continued building its "defensive shield" in case a war with North Korea does indeed break out.

Which presents a stellar opportunity for shrewd investors…

The United States has two antimissile defense systems – both of which have successfully passed test runs this year.

These systems are the THAAD and the GMD.

Bill first recommended the rocket engine venture as a "Buy" in 2013 – under its former name, GenCorp Inc.

And it's not too late to profit from this company. Currently, Aerojet is working to deliver 52 THAAD interceptors to the U.S. Army in the next year.

And as the North Korean threat escalates, those numbers are poised to climb.

For a chance to get in on more of Bill's perceptive profit plays yourself, click here.

Great idea, I cannot imagine any soldiers or elite eating a child or infants food ration.
They may even overthrow Jim #@$=^&.