Following the successful launch of an intercontinental ballistic missile (ICBM) yesterday morning (July 4), myriad atomic nonproliferation experts have been quick to announce that the United States is now officially in the "strike zone" of North Korea's nuclear arsenal.

The states presently at risk of being hit: Alaska and Hawaii.

And the United States can't do anything about it.

Though the vulnerability of two American states is arguably the most alarming development from North Korea this year, all it prompted from U.S. Secretary of State Rex Tillerson were calls for "global action" and for the United Nations Security Council to "enact stronger measures" against the regime's government.

We've seen such abstract responses before. Here are just a couple of recent ones...

These amorphous rejoinders have led some nuclear nonproliferation experts to believe that the United States has no logical plans for dealing with North Korea's arsenal, which has obviously advanced its capabilities in recent months.

But that doesn't mean the White House and the U.S. military are currently adrift in a sea of uncertainty and unpreparedness.

Rather, there is actually little American forces can do at this juncture to stop Dictator Kim Jong Un from growing his weapons arsenal and making more threats.

The U.S. Military Would Be Shooting Blind

If the U.S. military were to try and strike North Korea's nuclear arsenal somehow, it would essentially be shooting at targets in the dark...

You see, Pyongyang has as many as a dozen nuclear bombs now, CNN reported on June 30. But the locations of these bombs still remain uncertain.

This is because many of the North's weapons-manufacturing facilities are located deep in mountain caverns or underground in the regime's most densely-wooded, heavily-populated countryside...

"There's a lot of debate over whether Pyongyang has the 'miniaturized' nuke," Money Morning Executive Editor and "Asian arms race" expert Bill Patalon says, "though Kim Jong Un's March 2016 display of an alleged weapon analysts have dubbed 'The disco ball' is evidence that North Korea is there." 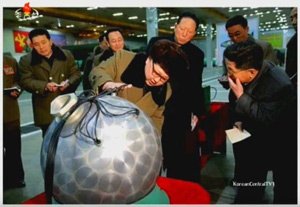 Bill goes on to explain that North Korea has conducted five nuclear tests so far, and a sixth has been expected for some time - but hasn't occurred.

"That may be due to the need for more research or more preparation (when the crews at North Korea's nuclear test site weren't playing volleyball, as seen in a satellite photo, they were digging tunnels)," Bill says. "Or it may be the fact that Kim has a penchant for 'timing' his tests for optimal moments - as he did with the ballistic missile launch on America's July 4 holiday."

This is all to say that the United States doesn't know for sure where North Korea's nuclear missiles are, or even how many there are. The guessing at North Korea's nuclear arsenal has led many nuclear nonproliferation analysts to believe that any attempt to target all of these bombs and the facilities that shelter them would certainly fail.

On April 15, Dr. James Hoare, who worked at the British embassy in Pyongyang, explained how targeting these weapons sites would ultimately fail...

"You may know what is on the surface, and you may have suspicions about other places," Hoare said, according to the UK's Sun Times, "but there is no guarantee any strike at its nuclear facilities would take it all out. Then you run the danger of provoking them without disarming them."

And given that North Korea's range now includes Alaska and Hawaii, "provoking them without disarming them" is a possibility that the United States simply cannot risk.

You see, the last time the United States seriously considered striking North Korea was in 1994, under then-Secretary of Defense William Perry. That was 12 years prior to Pyongyang's first nuclear test (2006).

At that time, Perry requested for the Pentagon to draw up plans for a "surgical strike" on a North Korean nuclear reactor. He backed off that strategy, however, upon the conclusion that the strike would almost certainly incite retaliatory warfare that could result in hundreds of thousands of South Koreans dead.

Now, the stakes are even higher - especially in terms of human-life tolls -- because we understand North Korea could effectively strike the United States.

So while all the U.S. administrations, including the one currently under President Donald Trump, have long said a North Korean ICBM is "unacceptable," Washington must accept it - that is, unless America is prepared to go to war and risk millions of lives in the process.

"Accepting the 'unacceptable' requires a collective effort from Washington to do the hardest thing imaginable: to admit that a policy has failed, that there is no five-paragraph op-ed that promises to produce a happy ending. North Korea is a nuclear-armed state and we have to deal with that. We have to admit that we have interests beyond denuclearization, and that those interests include deterring North Korea but also accepting that North Korea deters us. We have to talk with Tokyo and Seoul about living with a nuclear-armed neighbor. And we have to talk to Pyongyang about reducing tension."

The "failed policy" to which Lewis referred was the America's long-held "North Korea deterrence theory."

This theory surmised that North Korea's weapons testing could be significantly "deterred" if international sanctions, along with pressure from its chief ally, China, were put upon it.

North Korea's ICBM test yesterday culminated in a sort of universal outcry from weapons experts that this theory has failed and will continue to fail.

This "passive resistance," experts are now arguing, has left the United States and its Pacific allies with little knowledge about what, if any, "active resistance" measures should be taken next.

Bill adds his insight to this sentiment...

"The concern here is that North Korea is a rogue country," he says. "It's not part of the geopolitical mainstream. There isn't a formal structure to engage in discussions or to talk in case there's an emergency. In short, North Korea feels like it doesn't have much of a voice. This nuke program effectively gives it one. A big one."

China Needs to Step In - but Will It?

"The best scenario for all concerned here would be to have China deal with this," Bill says. "China has been North Korea's benefactor. It would be potentially the most effective, with the least amount of fallout for Washington."

However, Bill admits that would also be costly on many levels. Beijing would want the United States out of the South China Sea situation and would want all of the THAAD antimissile systems out of Asia - for starters.

And, so far, China has shown little willingness to be hyper-aggressive in curtailing the nuclear aspirations of its erstwhile beneficiary country.

So that means the next step would be for Washington to engage North Korea directly...

When it comes to doing just that, Bill outlines the "good, better, best" scenarios for his Private Briefing subscribers - all of whom have been privy to his coverage on the "Asian arms race" over the past four years.

Picks such as Lockheed Martin Corp. (NYSE: LMT), developer of nearly every defense and weapons system the U.S. military employs.

And since Bill first recommended LMT in March 2016, its share price has gone up 26%.

Take a look at more of Bill's recommendations, complete with his astute North Korea analyses, in his subscription service, Private Briefing. You can find it here...

If it took countries like the USA and Russia many years to progress from small, short to medium range missiles, I very much doubt that NK could do the same in a few short months. It is therefore obvious that far from stopping these NK maniacs from starting ww3, the Chinese, and maybe the Russians are actually providing them with the missiles to deliver these god awful weapons, and probably providing the weapons to be delivered themselves, as NK could NOT develop them themselves in such a short time without a great deal of help. China needs to be warned, "If you don't stop these maniacs, WE WILL", and if you protect them, you will start ww3. Be aware of what you risk." Faced with that I sincerely believe the Chinese WILL back down and finally take action against this madman KJU

All of the world needs to be alarmed that the madman running N.Korea has no knowledge of the consequences of his acts! He supplies other rouge states that have sworn destruction on our western allies, it may not be acceptable to strike first but it may not be acceptable not to strike first! The last time an enemy was dealt a nuclear attack it bought us 72 years of reasonable peace now however the proliferation of WMD helped by Kim Joung Un means every day brings us closer to a catastrophic event somewhere, better to do the necessary than to repeat history and let the unthinkable happen to us, or our allies, we risk our world by not taking punitive action first!