Legendary investor Jim Rogers just predicted a sea change in the way we use money.

"My children will never walk into a bank when they become adults," he said to China Daily in Hong Kong on Oct. 24. "By then, all of the banks along the streets will be replaced by computers and certainly mobile phones." 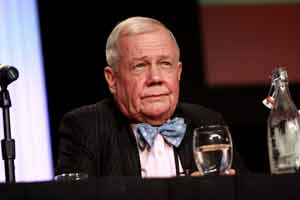 Moreover, Rogers foresees that physical cash will become obsolete around the same time.

Assuming Rogers meant 18 as the "adult" age, he's putting the death of physical banks - and even cash itself - at four to nine years from now.

That's why Rogers has recently invested in the first fintech bank developed by ITF Corp. According to China Daily, Rogers invested in ITF because he thinks fintech will be the future of banking, and he is confident in the industry's future.

We agree - there's no doubt smart financial technology, like online banking, will see a huge uptick in usage over the next decade.

But beware, these new technologies aren't always as effective as they seem...

A Hack Is Inevitable; Here's What You Should Do

"When everything is electronic, you can bring an economy to its knees," said Money Morning Capital Wave Strategist Shah Gilani on July 5.

And that was just one instance of what is possible when consumers trust institutions to handle all of their sensitive information.

"Are we aware of these kinds of situations? Absolutely," said Shah. "But do we know about all of them? Absolutely not."

Make no mistake: No person or institution is safe from cyber hackers. So, when the United States transforms into a cashless society, you better know how to protect yourself - and your money.

The best thing you can do is keep physical records of all of your assets, said Shah. This means checks, deposit slips, receipts, and even your stock market holdings.

Editor's Note: Take advantage of our free service that lets you choose which investing areas you want to follow. No more waiting. No more searching. No more missing out. Sign up for real-time profit alerts in one easy step now.

"I can't emphasize this enough - keep physical records!" said Shah. "It's very important that you maintain a trail."

Beyond that, it's what investors do after an attack that is most important.

"The only way to be 100% safe is to keep your money out of the system - but that's the worst possible plan," said Shah.

And if Rogers' prediction comes to fruition, it may also be an impossible plan.

In situations similar to the Equifax scandal, Shah recommends traders employ what he calls an "Event-Driven Pair Trade Strategy."