Congress is pushing major legislation that will do nothing for everyday Americans and everything for the lobbyists that fill their campaign coffers. 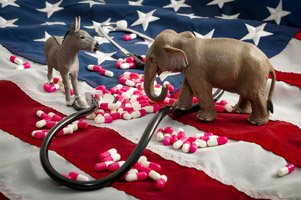 The bill was introduced just five days after U.S. President Donald Trump signed an executive order halting CSR payments to health insurance companies, arguing that such payments are no more than a bailout of an already flourishing industry.

Sens. Alexander and Murray boast 24 co-sponsors in the Senate, 12 in each party.

In other words, they've got a lot of bipartisan support - so much that if all of the Democrats support the proposal and the bill subsequently makes it to the floor, it would do so with a guaranteed filibuster-proof majority.

Because, while the Alexander-Murray bill was allegedly drafted with the American public's best interests and well-being in mind, that's far from the truth.

Here's the real reason the Alexander-Murray proposal was created...

Congressional Lawmakers Want to Secure Their Futures, Not Yours

The Alexander-Murray bill was borne of pure panic.

Not so much in a rush to help the "suddenly endangered" public, for whom the end of CSRs could mean an increase of 20% on their health premiums. Rather, it was more a quick fix that Congress found itself in order to secure legislators' political futures.

Anthem, for example, shelled out $5.9 million to deploy just five lobbyists in Washington last year ahead of the election, according to OpenSecrets.org today (Oct. 26). And Cigna has spent $3.9 million on lobbying efforts this year alone.

So of course legislators want to keep these insurers happy; their satisfaction equates to full campaign coffers in the future.

Alert: You Need This Precious Metal in Your Portfolio - Learn How to Leverage This Rare Market Anomaly Before It's Too Late.

Just look at the perks the insurance giants would be getting from the Alexander-Murray bill:

And as far as the efficacy of those subsidies is concerned, a federal judge ruled yesterday morning that there's no hurry to cough up money for insurers...

There's No Healthcare Cost Crisis Yet

18 states had pressured the White House to keep paying CSRs, but Judge Chhabria's denial of their filing went as follows:

"State regulators have been working for months to prepare for the termination of these payments," he wrote. "And although you wouldn't know it from reading the states' papers in this lawsuit, the truth is that most state regulators have devised responses that give millions of lower-income people better health coverage options than they would otherwise have had. This is true in almost all the states joining this lawsuit."

In short, Chhabria refuted the states' argument that there was an imminent danger to the public if the CSR payments ended. There must be an immediate harm to consumers for an injunction to be issued, the judge said, according to The Washington Examiner today.

Judge Chhabria's ruling exposes the CSR payment fiasco - dressed up as a crisis on Capitol Hill - for what it truly is: a non-emergency.

And it's that "non-emergency status" the supporters of the Alexander-Murray bill don't want you to know about.

Otherwise, they couldn't use Trump's CSR-gutting order to promote fear in the public about impending insurance loss - fear that will garner support for a bill that, once stripped away, proves to be nothing more than a proposal to keep their own lobbyists happy.

Stay One Step Ahead of the Politicians:  You can’t trust Congress to keep your best interests at heart, but its actions do directly affect your livelihood. Don't let the politicians in Congress decide your future for you. Get free updates on Capitol Hill by clicking the "Politics" Profit Alert, here.

But this is how Capitol Hill works - always under the guise of a national emergency. Crisis, as we've seen, presents legislators - and the lobbyists who own them - with lucrative opportunities.

The same could be said for average investors.

Only investors don't have to lie and cheat an entire population en masse to make money.

"Congress would rather burn the country than get anything done," he said on Aug. 1.

But one thing Congress is good at is creating crisis. And that's where Keith can help.

"One of the things investors fail to understand is something I talk about all the time: Crisis always creates opportunity."

That's why Keith focuses on the six "Unstoppable Trends." These trends include industries like medicine and energy - industries for which there is always a need, no matter what Congress is doing.

"These trends are backed by trillions of dollars that Washington cannot derail, the Fed cannot meddle with, and Wall Street cannot hijack," Keith says.

You can read up on these trends here, but there's another type of investment Keith wants Money Morning Members to know about.

It's one of his favorites, a kind of "desert island fund" he'd buy if he had to park his money in one place, "retire" from civilization for 20 years, and come back to a pile of money.

It seems that people will not move until exteme discomfort is realized, so it appears nothing benficial will be accomplished by the slugs in Washington until the "apple cart " has been tilted such that the populace will indeed come gunin'. You can poke a snake only so long before it strikes.