As tempting as it is to invest in initial coin offerings (ICOs) right now, the last thing you want is to lose your money to a crypto-scammer. 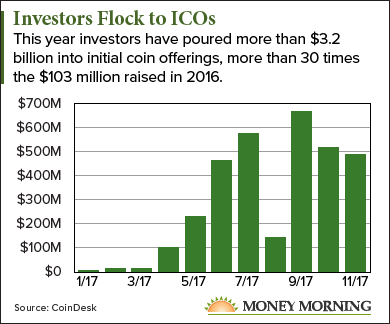 The past year has brought an explosion of new cryptocurrencies, most of which arrive in the form of an ICO.

Some ICOs have raised stunning amounts of money in the blink of an eye. In August, Filecoin set the current record by raising $252 million in 30 minutes. This year, more than 200 ICOs have attracted more than $3.2 billion of investor money.

But unlike the IPO concept on which they are modeled, ICOs are virtually unregulated.

Why Initial Coin Offerings Are Riskier Than Other Investments

Because the world of cryptocurrencies is virtually unregulated, ICOs lack any investor safeguards whatsoever.

For one thing, no regulatory oversight means the people behind an ICO don't need to follow strict disclosure requirements.

And because ICOs sell their tokens directly to the public, they don't need Wall Street investment banks or stock exchanges. Taking Wall Street out of the equation may sound appealing, but it removes another crucial layer of protection for retail investors.

A scam company would be exposed long before it reached its IPO date.

That lack of scrutiny makes it easy to launch an ICO designed solely to extract money from investors eager to get in on the ground floor of a fresh cryptocurrency.

It also means that if you fall into a scammer's trap, you have little recourse to recover lost funds. Money lost to crypto-scammers is usually gone for good.

But you don't have to pass up the extraordinary gains possible in cryptocurrencies out of fear. You just need to know how to tell legitimate ICOs from the risky ones.

Here are the red flags you should look for...

How to Spot an ICO Scam

I might do some investing in crypto but on a small scale at first.

You scared me off.

Permit me to mention another scammer Cryptocurrency Company named, Auroramines, they vanished with investors money and closed down their website auroramine.com. I lost a lot also because I was nor privy to information like yours on scammer ICO company. Now I am wiser. Thank you

have you hear of bitclave.com? what do you think of them?

I made $9,000 and lost 8,000. I'm still up but I did get scammed. It's a very tricky and volatile investment world. It is easier for thieves online to rob you than any other way in the world.

I always WISH I could try but makes me feel frigthened also need I need only small amount, but same interesting..