Because Bitcoin isn't backed by any government, some investors view it as a hedge against political instability and stock market corrections.

Suddenly, Bitcoin lost 34.71% of its value in 14 days as the stock market continued to rally. 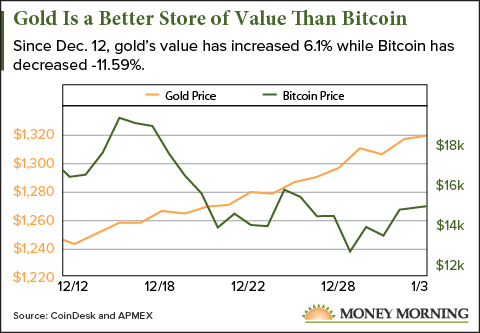 Which leads us to the question we keep receiving...

Should I buy Bitcoin or gold? 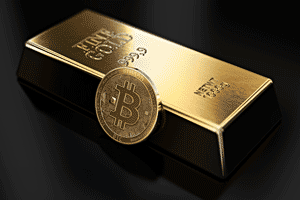 The answer is both, depending on your financial goals and risk tolerance.

Investors willing to accept high risk and volatility for the chance at massive gains can buy Bitcoin.

But as a hedge against uncertainty and political instability, Bitcoin should only be bought if you believe the U.S. government will collapse and the U.S. dollar will no longer be the world's reserve currency.

(If you're interested in buying Bitcoin, be sure to check out our complete how-to guide here.)

If you're hedging for any other reason, gold is a better investment.

But gold isn't just a hedge, it's also on pace to return investors huge profits in 2018. We'll show you our bullish new price target for 2018, as well as our shocking 2020 prediction, in just a bit.

First, here are three reasons why gold prices will soar this year...

Rising inflation will drive the gold price higher in 2018.

The current 2.2% inflation rate is its second-highest level in the last five years. That number is expected to move even higher as the stock market keeps reaching record highs.

Inflation is the rate at which the price of general goods and services rises and the purchasing power of the U.S. dollar decreases.

Over the last year, the number of short positions on gold stocks has fallen. One indicator of short interest is the Gold BUGS Short Index (NYSE: HUISH). This index tracks short selling on mining firms that specifically refuse to cut gold production based on gold price movements. In the last 12 months, HUISH has dropped 9.27%, indicating short interest in the broad gold sector is falling. This shows a shift in sentiment from bearish to bullish for gold.

Canadian gold mining company NovaGold Resources Inc. (NYSE: NG) shows an even starker change in sentiment. In the last six months, the volume of short bets on the stock declined 32.75%, from 19.05 million shares to 12.81 million.

But wait till you see this shocking trend that predicts when gold prices will rise - and our gold price target for 2020...