According to a report today (May 9) from CoinDesk.com, the brothers were awarded a patent for a system that executes transfers of exchange-traded products (ETPs). The price of ETPs derives from other investment instruments they are tied to, like cryptocurrencies. 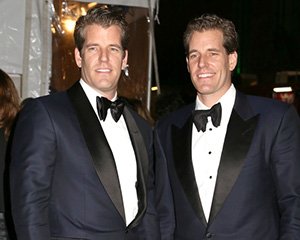 The duo has also tried to bring a Bitcoin-tied ETF to the markets, but the Securities and Exchange Commission rejected their last bid in March 2017.

In other cryptocurrency news, the price of Bitcoin pushed back above $9,300 as crypto enthusiasts thrashed Warren Buffett over his comparison of the world's largest coin to "rat poison."

Mark Wright, a Bitcoin investor and well-known businessman in London, argued that Buffett has a history of failing to understand both technology and innovation.

The new index will track the aggregate returns of the largest cryptocurrencies by market capitalization.

Here is a recap of the top five cryptocurrencies by market cap as of 1:30 p.m. EDT:

"Do I have to buy one whole bitcoin?"

That's a question a lot of our readers who are just starting to buy cryptocurrencies have been asking us.

The answer is no, and it's actually much easier than you think to eventually own a full bitcoin through an accumulation strategy.

The Top Cryptocurrency Stories for May 9