After one of the biggest earnings weeks of the year, the Dow Jones and S&P 500 are both pushing record highs. They're up 21% and 32% respectively since the beginning of the year.

That's driving the 219% potential growth for one of our best penny stocks to buy this week.

You see, it's not just the blue-chip stocks you see trading on major exchanges that are getting a boost this week. You've heard that "a rising tide lifts all boats."

And the best part is that penny stocks actually have far greater profit potential than those blue chips in the near term. Due to their low share price, a small bump can mean a huge percentage gain in very little time. 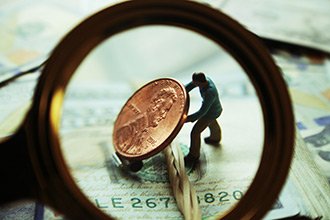 In fact, all of our top penny stocks this week are poised to more than double in price.

We found them using the Money Morning Stock VQScore™ system. Our proprietary algorithm analyzes the financials of thousands of stocks and scores them from 0 to 4.9. A 4.9 means the stock's price could shoot up at any moment. To get our best penny stocks, we simply looked for penny stocks with a perfect 4.9 VQScores.

(We also put together a quick tutorial to help you find penny stocks with the most profit potential. You can download it for free here.)

Not only are these top penny stocks rising with the tide of the broader market, they're also profiting from a big trend in North American oil. The U.S. Energy Information Association expects oil output from America to jump by 1.5 million barrels per day over the next year.

And these penny stocks are all going to profit from that. Our first pick is an energy company poised for a 108% gain…

This company has increased revenue by 59% in the last three years. And as North American drilling catches fire, it will keep pushing higher.

Southwestern's production costs have increased slightly in each of the last two years, 6% and then 9%. But this really just signals the company is making good use of its capital, as revenue continues to rise.

They're also highly profitable. Southwestern saw more than $535 million in net income at the end of 2018. In the last 12 months, however, its net income has grown 102%, and it will finish 2019 with over $1 billion in profits.

This company is $1.1 billion in market cap, which is impressive for a penny stock.

With a perfect VQScore of 4.9, even that could be conservative.

This company has increased revenue by 74% since 2016, and that allowed it to become profitable for the first time in 2018.

Since then, it hasn't slowed down. Net income has increased by 37% in the last 12 months, and as oil exploration continues in the United States, this company should see major revenue growth.

Its most recent earnings report came in early November, when it reported using only 74% of its predicted capital expenditure. That means this company has been efficient with its money.

This penny stock also has a perfect 4.9 VQScore. Analysts give it a 159% growth target for the next 12 months.

But that still doesn't top our best penny stock this week, projected to soar 219%…