The consensus among politicos is that we are not in a recession.

But it's important to note that even if we find ourselves "officially" entering one, it will be some time before we hear from the National Bureau of Economic Research (the officials make the call.)

So, you can expect this to happen around Christmas "officially." There are several positive indicators in the economy, including employment...

But the Fed must push interest rates higher...

Even if that would push us into a negative momentum environment.

The Fed simply must raise interest rates... to flush out all the excesses and bring inflation under control. It says our gasoline demand is LOWER than where it stood in 2020.

And while people are taking victory laps over lower beef prices and other metrics, the question is simple:

This is the lesson of the 1970s and the very problem that the Fed faced under Arty Burns. I'm not a fan of comparing previous crises because variables are much different. But you must still study past lessons to determine the best path forward.

In 2008, Bernanke argued that the solution was to create more liquidity in the economy due to his deep knowledge of the Great Depression. It worked.

I'm not convinced the Fed has the political will to do what Paul Volcker did in the 1980s, and, so, we'll experience nasty stagflation bouts in the years ahead - particularly as deglobalization accelerates and we bring our supply chains back to North America.

Chart of the Day: "Reduction" is the New "Affordable"

A colleague recently posted a healthcare "receipt" of the cost of having a child in a U.S. hospital. The total cost - according to this image - was about $600,000.

Congrats on your new child, I guess?

Well, this chart below speaks to the ongoing issue. Healthcare stocks continue to rally - and we can thank the cronyism of the "Affordable Care Act" - one of the most poorly named bills in the history of Congress.

United Health Group (NYSE: UNH) stock - the nation's largest insurance provider - is printing gains, and it's blown away the S&P 500 since the government got involved... 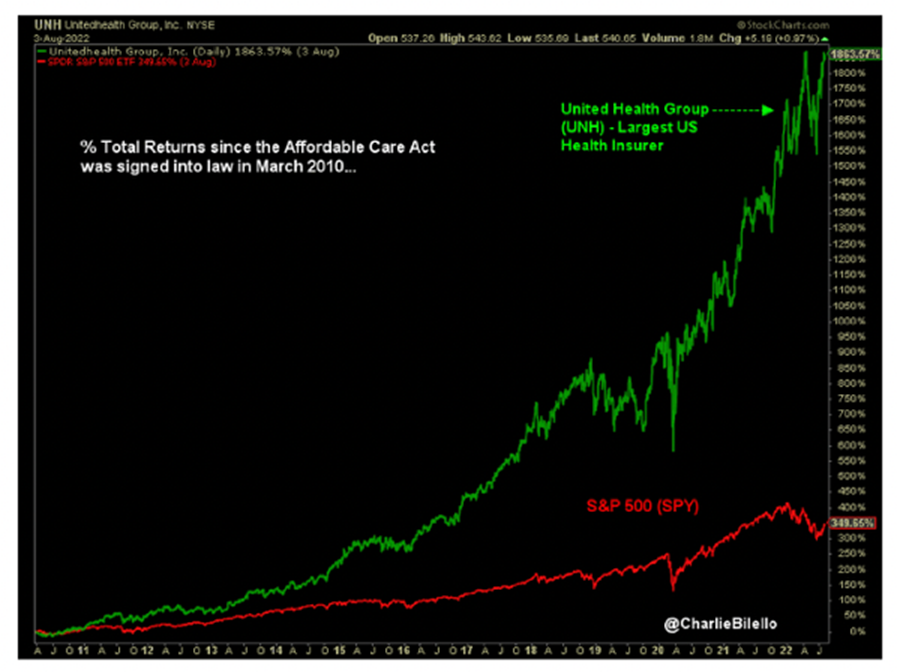 Thank you, corporatism... It's working out so well...

Just like they're about to pass an "Inflation Reduction Act" that won't come close to accomplishing what it sets out to do?

Looking for an uptick in volatility this week as we await the July consumer price index (CPI). I've been candid in my expectations for it to remain hot thanks to housing and rent costs.

I'll see you at 12:30 pm et for the show, and then it's off to the World's Biggest Trade, where I'll take this mountain of weekend research and turn it into a Winner.