We've been closely following the cozy relationship between China and Russia for years.

An important part of that relationship is the two countries' mutual goal to compete with -- and beat out -- Western powers.

One way to do that is by creating an entirely different gold market... 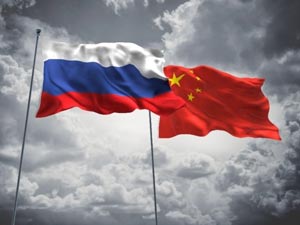 Now, notorious economist Peter Schiff  has brought up the same idea in an April 13 blog post:

"Russia and China have gotten much cozier over the last several months, and the two countries are reportedly working to develop a joint organization of trade in gold," wrote Schiff. If successful, this could have a significant impact on both the dollar and the price of gold for investors...

In fact, the Chinese have been laying the foundation for this friendship for quite some time.

It Started with the Silk Road Gold Fund

And since then, China has aggressively added to its gold reserves.

In fact, later that year, China announced its largest gold investment fund of the time - one that would dramatically alter China's influence on gold. It was dubbed by experts as the "Silk Road Gold Fund."

"In addition to buying stakes in gold-mining projects and companies in the New Silk Road area using 'private-equity and venture-capital methods,' the new fund would also be used to invest in gold-miner stocks and to set up gold exchange-traded funds... The fund may also boost China's power over the world gold market and could increase the use of the yuan in pricing gold," reported MarketWatch in May 2015.

Since then, the Chinese have aggressively added to their holdings...

Just one year later, in 2016, China reported its gold holdings had skyrocketed an additional 11% to 1,838 metric tons. 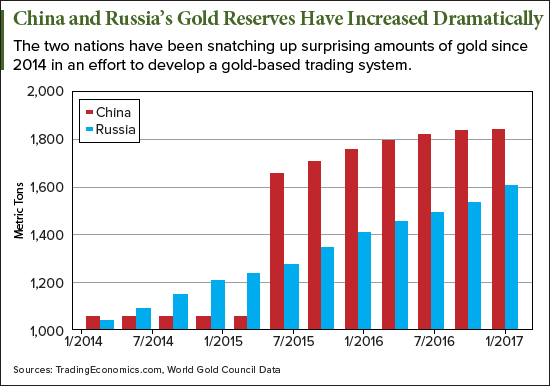 Although, no one knows exactly how much gold China really has.

You see, China has a history of only reporting its gold reserves every few years. And odd math has raised questions about even these "official gold numbers."

Many analysts, including Schiff, believe the Chinese actually own more gold than the official numbers indicate.

Creating a Link Between Two Cities

Russia is also increasing its presence in the gold market. Along with China, it has ranked as one of the world's leading buyers of gold over the last couple of years.

"Sooner or later, we may see more and more countries break away from the dollar collar and join the gold-trading world. In that case, gold prices will soar and shares in well-run gold mining companies will explode upward."
In fact, the Russian central bank officially holds over 1,615 metric tons of the yellow metal, ranking its gold holdings sixth in the world, next to China.

Must Read: For only the third time in 20 years, a metal more rare and more exotic than gold is about to make stock market history. And it's poised to make early investors a lot of money. Get the full story.

You see, on a visit to China last year, the deputy head of the Russian Central Bank, Sergey Shvetsov, actually confirmed that the two countries are working in tandem.

"We discussed the question of trade in gold. In China, the gold trade is conducted in Shanghai, in Russia it is in Moscow. Our idea is to create a link between the two cities in order to increase trade between the two markets," Shvetsov said to TASS Russian News.

Many analysts believe Russia and China are snatching up all this gold because they want to cut their dependence on the U.S. dollar and euro.

What This All Means for Investors

China and Russia are colluding to shift away from dollar- and euro-based trade and revert back to a true gold standard.

In fact, Daily Reckoning analyst Byron King dubbed it as the new "de-dollarization in trade" to SchiffGold.

"Up to now, there has never been anything approaching a serious challenge to the global supremacy of the dollar - certainly not in global trade. Yet here we are, watching Russia and China set up a proto-trading system based on gold. The daily quote for gold seems not to price in even a hint of this development. Yet it could have world-altering implications as it all unfolds," he said.

Indeed, if this gold-based trade expands to other large nations, it could cause a rush to safe-haven investments, like the yellow metal, from investors.

"Sooner or later, we may see more and more countries break away from the dollar collar and join the gold-trading world. In that case, gold prices will soar and shares in well-run gold mining companies will explode upward," said Schiff.

Money Morning Executive Editor Bill Patalon - our champion stock picker and global trend expert - has identified one gold mining stock that stands out from the rest.

In fact, this company started a revolutionary "Internet Gold Rush" that led it to uncover more than $3 billion worth of gold in just a few months.

Now, current events - like Brexit and a possible Frexit - are setting this stock up for more serious gains.

Video
In the Private Briefing basket of 217 double- and triple-digit peak gain winners, this company and its high-profit shares really stand out. To learn how to get access to all of Bill's daily recommendations and analysis, just click here.

I would probably double the amount of gold that China has. As it ships it from overseas in a secret cargo. This has been going on for decades.

Indeed, this has been going on for quite some time. In fact, our Chief Investment Strategist, Keith Fitz-Gerald, has been following this closely since around 2007. According to Keith, this is all part of a long-term move by China to bypass traditional currency pairs and create a new global reserve currency with HUGE implications.

I highly recommend you check out some of Keith's expert insights on China. He explains this exact situation here: https://mney.co/2pCc8wa

I believe the global financial web is manufacturing this "new dynamic" of a gold rush. Why? Because like all other stratagems of this global cabal, this one will lead the public masses, aka "the herd," in exactly the direction the cabal wants it to go. Why? So the very few that comprise the cabal can again capitalize on channeling the behaviors — and the collective wealth — of the world's masses.
The ostensible value of gold is as illusory as the value of a dollar not based on it. It is what those "in control" say it is. That's all.
I proffer that if you move with the herd, there is no protection in numbers. That is the base of the illusion now being perpetrated.

thats a big statement, but it may be true. .according to a report some time ago the us treasury has been exporting, or should i write, china has been importing,
usa gold for quite a while out of fort knox and maybe it IS true that fort knox has only gold plated tungston ingots. but there is the ukrainian gold and the libyan gold that was rather, purloined by usa, recently,so maybe that has filled the void.
it is a curious world where nobody knows for sure who 'wears the pants'. was there a power outage in some usa cities yesterday? i just read a report about mainly san francisco and other cities being out of sorts because of major sun spot activity(storms). cheers from oz