After prices fell 10% in December, many investors wondered if the bull market in gold was running out of steam.

That was before Federal Reserve Chairman Ben Bernanke swooped in with a "red cape" and fired the bulls back up.

Since the Fed reassured the world that interest rates will remain at "exceptionally low levels" for another two years, gold has jumped more than 3%.

UBS AG (NYSE: UBS) described the situation simply, "if investors needed a (further) reason why they should be long gold now, they got it yesterday ... a more accommodative policy is a very good foundation for gold to build on the next move higher."

To gold bugs, two more years of near-zero, short-term interest rates means negative real interest rates are here to stay, and this has historically been a strong driver for higher gold prices.

Bernanke and the Fed aren't the only central bankers in the fiscal and monetary bullring.

Brazil has cut its benchmark interest rate a few times and China lowered its reserve rate for banks in December. According to ISI Group, 78 "easing moves" have been announced around the world in just the past five months as countries look to stimulate economic activity.

One of the main weapons central bankers have employed is money supply, which has created a ton of liquidity in the global system. Global money supply rose 8% year-over-year in December, or about $4 trillion, according to ISI. I mentioned a few weeks ago how China experienced a record increase in the three-month change in M-2 money supply following China's reserve rate cut.

Together, negative real interest rates and growing global money supply power the Fear Trade for gold. The pressure these two factors put on paper currencies motivates investors from Baby Boomers to central bankers to hold gold as an alternate currency.

Adrian Ash from Bullionvault says global central banks are on a buying spree and they have been since the Fed cut interest rates by 25 basis points in 2007. Central bankers' shift to buying gold was a significant sea change for the yellow metal.

You can see from the chart below that official gold reserves have historically been much higher, averaging around 35,000 tons. In the 1990s, central banks began selling, with reserves hitting a 30-year low right around the time the Fed began cutting rates. Ash says that gold holdings are now at a six-year high with the current amount of gold reserves just less than 31,000 tons.

These are countries large and small. In December, Russia, which has been routinely adding to the country's gold reserves since 2005, purchased nearly 10 tons; Kazakhstan purchased 3.1 tons and Mongolia bought 1.2 tons. UBS says "although reported volumes are not very large, it is still an extension of the official sector accumulation trend."

Not all central banks are recent buyers, though. The "debt-heavy West" has sold its gold holdings, while emerging markets increased their gold reserves 25 % by weight since 2008, says Ash.

Reserves as a percent of all the gold mined has also declined, with "a far greater tonnage of gold ... finding its way into private ownership," says Adrian. Since 1979, you can see the percentage of reserves to total gold has declined at a much faster pace as individuals increasingly perceived gold as a financial asset.

Ash points to China's Gold Accumulation Plan as a recent example of this trend. A joint effort between the Industrial & Commercial Bank of China (ICBC) and the World Gold Council (WGC), the program allows Chinese citizens to buy gold in small increments as a way to build up their gold holdings over time. The WGC reported in September that the program had established 2 million accounts during its first few months in operation and the amount is growing by the day.

These programs open the door for gold as an investment to a whole new class of people in China but that's only a fraction of the tremendous demand for gold that we are seeing from China.

Gold and the "Love Trade"

In addition to the Fear Trade, gold is driven by the Love Trade, which is the strong cultural affinity the East, namely China and India, has to the precious metal.

Indian jewelry demand has historically increased during the Shradh period of the Hindu calendar, but last year, high prices and a volatile rupee kept many Indian buyers on the sideline.

If you thought $1,900 was too much to pay for an ounce of gold, imagine how Indians felt when the rupee fell against the U.S. dollar, causing a gold price spike in rupees. Gold in Indian rupee terms rose more than 35% from July to November, roughly three times the magnitude of gold priced in U.S. dollars, yuan or yen.

This currency swing significantly impacted Indian gold imports, which dropped 56% in the fourth quarter, according to data from the Bombay Bullion Association. 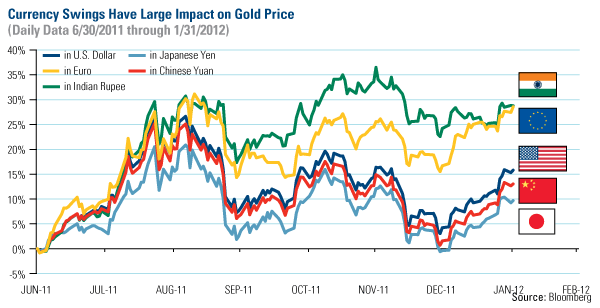 "Indian buyers will be back" after they adjust to the higher prices, says Fred Hickey. In one of his latest editions of "The High-Tech Strategist," he cites late 2007 as a recent example when the Indian gold market experienced a similar rough patch.

That year, gold demand in India fell off a cliff after prices spiked more than $1,000 an ounce in one quarter, tarnishing the country's love affair with gold for a "brief period." Fred says their cultural affinity for gold as an important store of wealth and protection against inflation will drive Indian buyers back into the market.

The trend was already changing in 2012, as UBS reported that the first day of trading saw physical sales to India were twice what they usually are, according to Hickey. Although this is a very short time frame, I believe the buying trend will continue in this gold-loving country.

In China, "just as in India, gold is seen as a store of wealth and a hedge against inflation," says Hickey. Demand has been growing, especially in the third quarter, when China's gold purchases outpaced India. "Physical demand for gold from the Chinese has been voracious all year," says Hickey. As of the third quarter, China had already obtained 612 tons, eclipsing its total 2010 demand, according to the WGC.

Growth in this segment far outpaced clothing and footwear, household electrical appliances, and even food, beverage, tobacco and liquor, all of which experienced more modest growth. 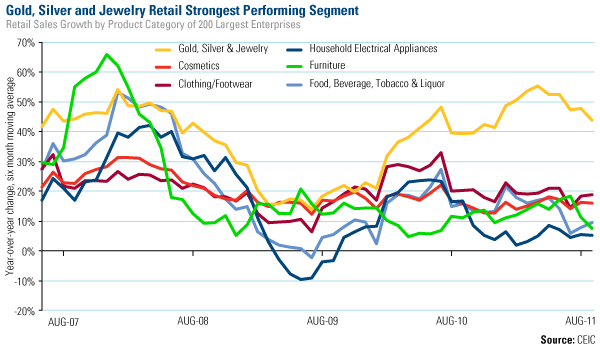 JPMorgan says the bulk of the increase came from lower-tier cities "where income levels are rising the fastest and improvements in retail infrastructure have allowed for rapid store expansion."

Increasing incomes coupled with government policies that support growth have been the main drivers for rising gold prices. Take a look at the chart below, which shows the strong correlation between incomes in China and India and the gold price. As residents in these countries acquire higher incomes, they have historically purchased more gold, driving gold prices higher. 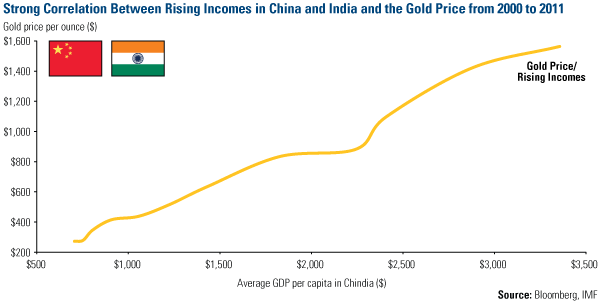 We anticipated that the Year of the Dragon would spur an increase in the buying of traditional gifts of gold dragon pendants and coins. Gold buying did hit new records, says Mineweb, with sales of precious metals jumping nearly 50% from the same time last year, according to the Beijing Municipal Commission of Commerce.

This should serve as a warning to all of gold's naysayers.

Gold bullfighters beware - you now have to fight the gold bull while fending off a golden Chinese dragon.

give me money without any condition attached to it.