We've witnessed how the oil activity is boosting the local economy with solid-paying jobs, a healthy housing market and strong consumer sentiment, as oil giants such as Schlumberger and Halliburton take a bigger stake in the area.

After seven long decades of importing oil, the U.S. seems only a few years away from reversing the flow, largely from shale technology not only in Texas but several areas around the country.

By 2020, the estimated gap between supply and demand narrows considerably. Take a look...

Production has been growing at such a steady pace in recent years that Credit Suisse says the U.S. should see the largest growth of crude oil than any other oil producing country by 2015. An anticipated growth capacity of nearly 4 million barrels per day in the U.S. is three times more than Iraq, and almost four times more than Brazil, Canada and Russia. 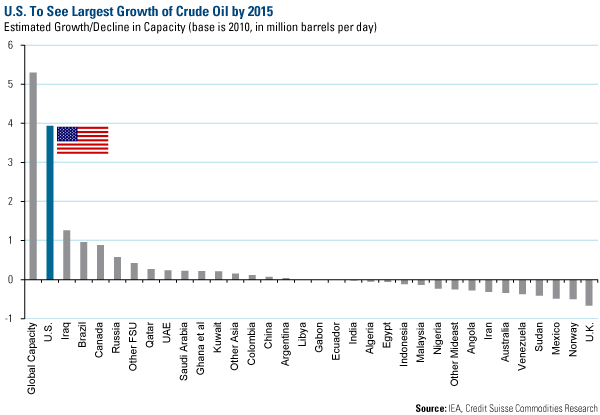 2012 might be the year that the world fully realizes the significant contribution North America has made to the overall global oil supply, especially after the International Energy Agency (IEA) claimed that the U.S. would surpass Saudi Arabia as the largest oil producer around 2020.

In addition, new discoveries of oil have led to disappointing results. There was high hope that a small group of countries-Brazil, Russia, Iraq and Kazakhstan, or the BRIKs-would "redraw the world's oil map by boosting their production over the next two decades," says the Financial Times. However, the newspaper reported that Kashagan field in Kazakhstan, "the biggest oil discovery in nearly four decades," will finally begin pumping next year after several delays. Its anticipated flow is about 150,000 barrels per day, then rising to 350,000 barrels a day, but those figures are way below the maximum pumping target of 1.5 million barrels a day.

Yet century-old legislation may be the biggest obstacle to the U.S. becoming a card carrying member of OPEC. Around the time when Henry Ford was selling his Model T to millions of Americans, the government passed the Minerals Leasing Act of 1920, dictating that all U.S. crude exports must get approval from the government before proceeding. At the time, the country had net imports of about 300,000 barrels of oil a day. 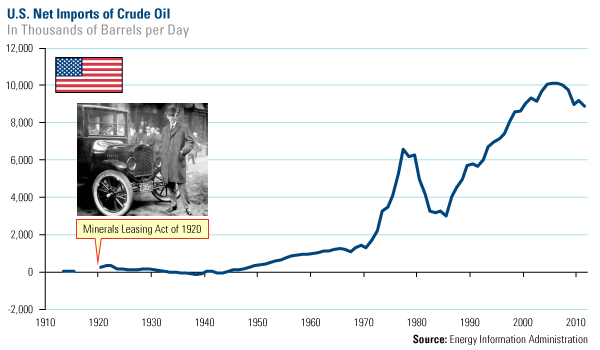 Since the 1940s, the U.S. hasn't had to worry about what to do with excess barrels of oil. With the rising use of oil, the country increasingly consumed more of the commodity than it produced. However, over the years, certain types of exports have been allowed, including exports to Canada (not including the crude from the Trans-Alaska Pipeline System, which has other restrictions), exports from Alaska's Cook Inlet, re-exports of foreign origin crude, and exports made under international agreements, says Raymond James.

But other exports are only permitted on a case-by-case basis as they are more dependent on what the government believes is in the nation's best interest. Beyond what's written in the rule books, "there are political overtones to anything that entails presidential discretion," says Raymond James.

The firm compares potential oil exports in the future to the experience of natural gas exports today, noting that "utility and manufacturing trade groups are actively lobbying against U.S. liquefied natural gas export permits because, of course, any such exports would incrementally raise domestic gas prices."

In the spirit of economic nationalism, Raymond James believes that "as applications for crude export permits become more common, we would anticipate opposition to emerge, which means that the newly reelected Obama administration will probably suffer political backlash if it signs off on increasing exports of U.S. crude."

The backlash that would result is likely because there is a common misperception between exporting crude and the price of a gallon of gasoline at the pumps, which is based on the Brent price of oil. "The irony here is that U.S. consumers pay a global price for gasoline, and exporting U.S. "land-locked' light sweet crude would actually help push down the global price of gasoline," according to Raymond James.

"Keeping the "land-locked' crude in the U.S. does nothing to help domestic consumers, but as we all know, politics and reality can be very different things," says the research firm.

If Washington prevents oil from leaving the country, the likely outcome is that barrels will begin stacking up in the Gulf Coast area. With the significant growth from areas such as the Bakken, Eagle Ford and the Niobrara Formation in Nebraska, Bank of America Merrill Lynch estimates that by 2017, refiners will likely be "saturated with light oil." 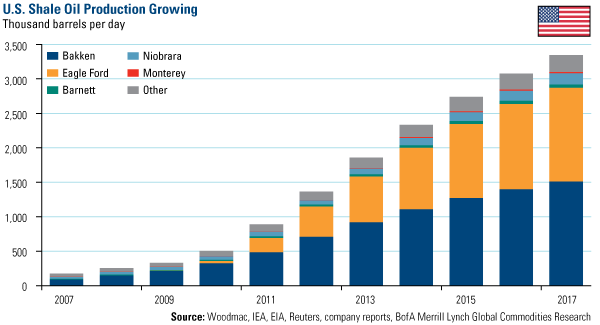 How do investors benefit in the near term? Look to U.S. oil refiners, especially those with mid-continent exposure such as HollyFrontier (HFC) and Phillips 66 (PSX), which stand to benefit from these rising trends in production.

Refiners have two distinct advantages that help them bring in more profits. One is the fact that the price of WTI oil has been trading at a discount to Brent.

In 2012, the spread between WTI and Brent averaged about $17 per barrel. Domestic refiners have access to less expensive crude and benefit from the price differentiation as its refined product is priced closer to Brent.

The other big advantage for U.S. refiners is record low prices for natural gas, a commodity used in large quantities by refineries.

The Global Resources Fund (PSPFX) gives investors front seat access to this growth. In its diversified portfolio, there are multiple ways to benefit from the rising supply of oil in the U.S. See the funds' latest list of top 10 companies here.

We, the the average citizen, still have hope that Congress will start doing what is right for America and pay far less attention to lobby pressure. If possible, then a balance between allowing LNG exports against our producttion, usage, and storage capacity for gas would allow gas prices to rise to levels that made it profitable for future gas drilling and still keep prices reasonable for current uses. The conversion of more autos and trucks to LNG would be part of the equation, too. Overall, it would keep our prices reasonable and the exports would improve our oil trade balance. To keep things in balance, the export numbers could be changed, or an export tax applied. OPEC found a way to get countries that don't even like each other to unite, so it just doesn't seem logical that we can't find a way to do the right things within our own country. Technology changes things radically on what seems like a daily basis, and will continue to impact fuel economy, finaly make make solar a common standard on homes, and things we haven't even thought of yet. In many ways, our future can be brighter than ever before in history. Neither we, nor the politicians, should forget that we have a voice, should contact our Reps, and vote according to performance on issues related to econmic health and growth, with far less time spent on bills not related.