March 2013 - Money Morning - Only the News You Can Profit From

I just read a Page One story in The Wall Street Journal I found so disturbing that I had to send this to you right away.

The story's main message was that millions of Americans can't afford to retire.

To me, that's just nuts…

After all, America isn't just the land of opportunity and democratic freedoms – it is the single greatest wealth machine in the history of the human race.

So why are so many Americans struggling right now?

Well, there' no doubt the Great Recession of 2008 cut a swath through a lot of people's savings. Millions lost their jobs and had to rob from their savings to just make ends meet. I sincerely hope that didn't happen to you…

I'm going to teach you how right here…

The most recent milestones came Thursday when the Dow Jones Industrial Average closed at yet another record, and the Standard & Poor's 500 Index finally closed above its all-time high.

Here's a look at the quarter's biggest gains and losses, as well as what investors should do now as we head into April. 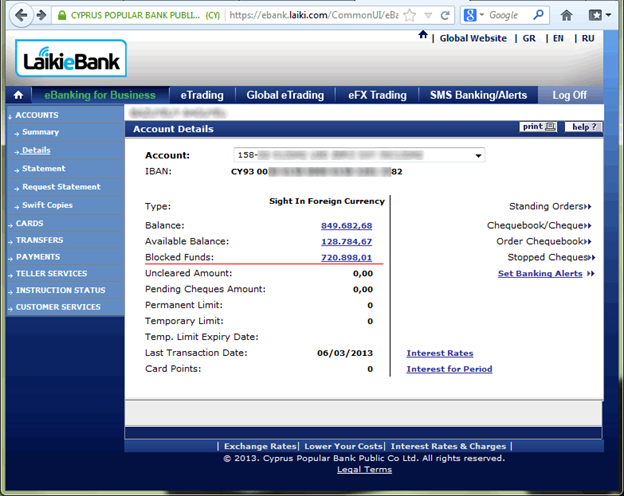 Legendary investor T. Boone Pickens has been called the Warren Buffett of energy investing, and over the years he has built up quite a legacy.

From his days as a wildcatter drilling in unknown oilfields, Pickens went on to start his own oil company, Mesa Energy, take on the likes of Exxon Mobil Corp. (NYSE: XOM), and manage a hedge fund, BP Capital.

Boston Properties Inc. (BXP), in collaboration with Hines, announced the completion of the acquisition for a land parcel – 101 First Street, next to the Transbay Terminal. The companies bought the asset from Transbay Joint Powers Authority (TJPA) for roughly $192 million. 101 First Street, a 50,000 square foot land parcel, was sold at nearly […]

Now that the dust has begun to settle in Cyprus, the battered principle of deposit insurance seems to be safe-for now at least.

In the big stare-down with the European Union the final Cyprus settlement did not zap the small depositors.

Instead it simply shifted the burden further up chain. The final deal increased the "haircut" on large depositors in the Bank of Cyprus and Laika Bank from an originally proposed 9.9% to an astounding 40%.

To me, that's highway robbery — even if the Russian Mafia has to bear a big share of the brunt.

As strange as it may seem, even the Russian Mafia has rights!

The lessons here are quite clear…

If you're a longtime reader, you know that I'm a "collector" of investing adages and aphorisms – you know, things like "Bulls make money, bears make money – but pigs get slaughtered" … or "Buy on the cannons, sell on the trumpets."

These long-held sayings are usually clever, are often amusing and are always easy to remember. And they can really help you make money.

One of my favorite tech-investing adages holds that "You can always spot the pioneer – he's the one with the arrows in his back."

The message: If you're going to invest in a company whose technology is out on the cutting edge, you have to make sure your research is solid. Be as certain as you can that the technology isn't ahead of its time, will find a market and isn't about to be leapfrogged by a better, more-market-friendly technology.

In that report, we predicted that EMC would continue to gain global market share in its core disk-storage business – putting additional distance between it and its rivals.

Jim Rogers, the legendary Wall Street trader and best-selling author, is at it again.

In a new book and a series of recent interviews, he's explained the best investments to make now as central bankers flood the planet with paper money, creating a nightmare environment for investors where "everything has problems."

"For the first time in recorded history, we have nearly every central bank printing money and trying to debase their currency. This has never happened before," Rogers told Chris Martenson at PeakProsperity.com.

He said as central banks maintain policies of low interest rates and inflation, individuals and households are being punished, while the irresponsible are being rewarded.

My Dad, Clarence "Rob" Robinson, has always been a very tough guy.

He played football in high school, and then again as a U.S. Marine. During a game at Camp Pendleton, an injury put his right knee in a cast. Later, while fighting in Vietnam, his left knee was wounded.

But he refused to let the injuries slow him down.

Now, however, as he approaches his 80th birthday, my Dad has to take action. Next month, he goes in for a knee replacement.

It's become a pretty common procedure, so I'm not worried about the surgery itself.

But I am a bit concerned about "Super Bugs."

You know what I'm talking about. Drug-resistant Super Bugs are afflicting hospitals, clinics and patients all across the country.

In fact, I'll wager that you know of a family member, friend or co-worker who's dealt with this scary – even terrifying – malady.