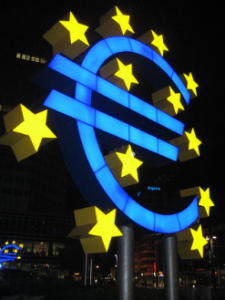 Stock market today, October 27, 2014: The stock market today (Monday) is showing signs of retreating after its best week of 2014. Stock market futures indicate a market open 68 points lower than Friday's close. The markets are turning downward on continued weakness in the Eurozone and on news that Brazilian President Dilma Rousseff won re-election in a Sunday runoff vote.

The most important number to watch today - besides the Dow Jones - is 103.2, the level of this morning's report on German business confidence, released by the Ifo Institute. This is the sixth consecutive miss of this leading indicator for the German economy, and suggests that the Eurozone's largest engine is struggling to get back on track after a second-quarter contraction. The 103.2 reading was well below analyst projections of 104.5. With additional problems plaguing the Eurozone economy, including a large percentage of banks failing the European Central Bank's recent stress tests, these jitters could affect confidence in global markets.

Here's what else you should know - including your Tip of the Day - to make your Monday profitable: