Chesapeake Energy Corp.'s (NYSE: CHK) stock price rose 4.6% overnight - thanks to Carl Icahn. The spike came after the billionaire investor announced last night he increased his stake in the company to 73 million shares - up from 66.4 million in December. 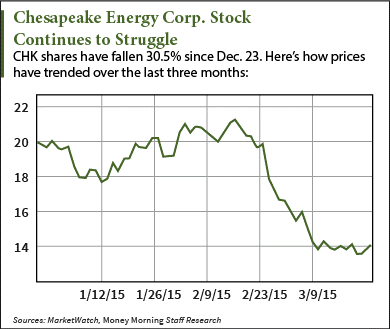 That means Icahn bought CHK when it was trading at lows not seen since 2004. The CHK stock price has fallen almost as much as oil prices in the last year. The Oklahoma City-based company is down 39.5% since last March amid quarter-over-quarter earnings losses.

But even with these struggling share prices, Icahn loves energy companies.

"I believe a great amount of profit in the next few years will be made by those who hold positions in energy companies," he told Forbes yesterday. "However, I also believe that oil prices will continue to decline in the near term."

Icahn has held a position of leverage with Chesapeake for several years now. In May 2012, he paid $785.3 million for 50 million CHK shares. That was 7.56% of the company's outstanding shares at the time. A year before that, Icahn persuaded CEO Aubrey McClendon to sell Chesapeake's stake in the Fayetteville Shale for about $5 billion.

The CHK stock price rose as high as $29.50 a share in June 2014 before falling oil slammed the company.