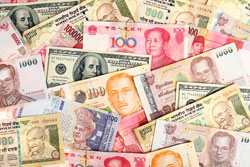 The DJIA index slid 60 points as corporate earnings continue to show the effects of a strong U.S. dollar. The dollar has surged more than 9% year to date and punished companies with a broad international focus and reliance on overseas sales. The Nasdaq moved 19 points higher on news of a proposed biotech merger.

What Investors Must Know This Week: