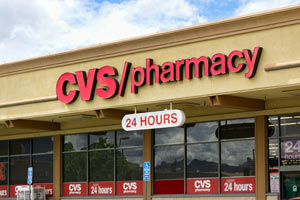 Futures for the Dow Jones today (Monday) forecasted a 93-point decline from Friday's close on news that debt talks between Greece and its international creditors collapsed on Sunday afternoon. This morning, the Dow received some positive news when CVS Health Corp. (NYSE: CVS) gained 1.2% after the company announced a deal to operate pharmacies inside of Target Corp. (NYSE: TGT) locations. In addition, Alibaba Holding Group Ltd. (NYSE: BABA) announced plans to launch its own streaming service in China.

On Friday, the DJIA pared weekly gains as investors grow more nervous over Greece's debt talks and speculation that the Federal Reserve could increase interest rates in September. Shares of the National Bank of Greece (NYSE ADR: NBG) again sold off sharply, falling more than 13% this morning, as concerns over the nation's financial sector continue to worsen.