What did the Dow do today, June 18, 2015? Get all your stock market closing numbers and important news here… 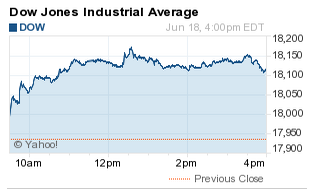 The DJIA today gained 180 points and the Nasdaq hit a 15-year high as traders showed some optimism over Greece and cheered news that the U.S. Federal Reserve will wait until later this year to raise interest rates.

What You Need to Know