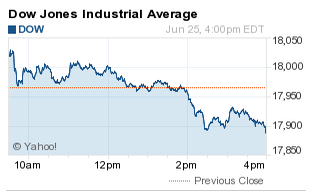 The DJIA today fell 75 points, as investors continue to monitor issues in Greece. The decline would have been greater if healthcare and insurance stocks didn't hold up the markets today.

This afternoon, the U.S. Supreme Court ruled in favor of preserving Federal subsidies offered under the Affordable Care Act.

Meanwhile, little progress was made in Europe as Greece attempts to complete a last-minute drive to resolve its pending debt obligations to its international creditors. Today, Germany's Chancellor Angela Merkel said a deal must be reached by Monday.