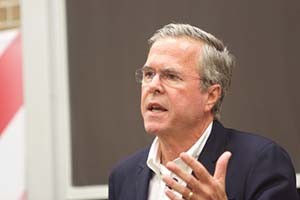 Therein, the former Florida governor stated his intention to overhaul the current tax code, describing it as a "convoluted nightmare" that drives American businesses to relocate overseas.

Bush then outlined his desire to "eliminate the convoluted, lobbyist-created loopholes in the code." He took aim at the wealthy's ability to deduct greater shares of their income than anyone else. This part of the proposal echoes GOP frontrunner Donald Trump's idea, who told Bloomberg on Aug. 26 that he wanted to simplify the tax code and tax the rich.

Lastly, Bush made an argument for lowering the corporate tax to 20% from its current 35%, while giving businesses the chance to deduct new capital immediately. You see, according to Cato Institute research, the United States has the highest corporate tax rate among major industrial nations. Its effective tax rate of 35.6% on new corporate investment is nearly twice the average rate for the 90 countries studied. That's why 21 out of the 500 companies on the S&P 500 are headquartered outside of the United States.

But as these giants dodge taxes, their contribution toward the nation's total tax revenue has declined.

"To pay for this [rate reduction]," he wrote, "we will eliminate most corporate tax deductions-which is where favor-seeking and lobbying are most common - and remove the deduction for borrowing costs. That deduction encourages business models dependent on heavy debt."

Bush concluded his tax proposal by admitting that the way to change the tax code and policies is to first change the way Washington works. And to do that, he wrote, "We have to change who we send there to lead. That's what my economic plan will achieve, and that's why I'm running for president."

How to Wipe Your Server 101, an Online Course: The Hillary Clinton email probe has hit a major nerve - even with her own party members. As more and more damning details emerge, the less the public - the less people trust her. Here's a look at the Hillary Clinton email investigation timeline that's dragging the 2016 presidential candidate from her party's top spot...