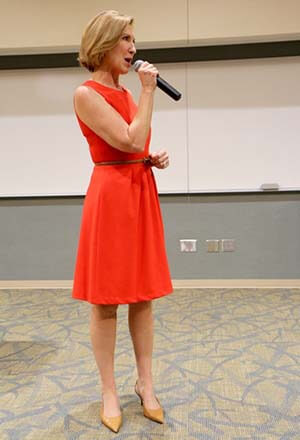 Republican presidential nominee Carly Fiorina is crushing the polls right now. In the month of September, she rocketed from 3% support to 15% by month's end, according to the latest CNN/ORC poll out Sept. 20. That puts her in second place behind GOP front-runner Donald Trump.

Carly Fiorina leadership in the White House would be a good thing for the U.S. technology sector. According to Money Morning Defense & Tech Specialist Michael A. Robinson, the former Hewlett-Packard Co. (NYSE: HPQ) CEO grasps the ever-growing importance of the cloud, Big Data, the Internet of Everything (IoE), and other tech sectors in both our lives and the U.S. economy.

"With Fiorina, the odds that we may get a U.S. president who understands that the road to wealth is paved with high tech have increased significantly over the past few weeks," he told readers on Oct. 1.

Robinson notes that he's not endorsing Fiorina - or any candidate. "My role is to analyze the markets...the news... the major trends - and then show you how to profit," he said.

But Robinson points out that tech stocks are some of the highest-performing on the market. The Dow Jones U.S. Technology Index (INDEXDJX: DJUSTC) has outperformed the broader DJIA 19.95% over the last five years. On top of that, the emergence of e-commerce, semiconductors, advanced sensors, smartphones, the connected car, and the IoE mean tech's rapid growth is catapulting society further into the Digital Age.

So of course he's tuned into which of all these candidates would embrace tech - and the best option is Fiorina.

"It is critical that those running for the White House understand the fundamental role technology plays in our lives," Robinson said. "Now, a Fiorina presidency remains a very long shot. But add it all up, and you see that what many thought was impossible back in July is now becoming a prospect - that we just might get a major party candidate who hails from Silicon Valley."

Here's a look at exactly why Fiorina as president would be good for U.S. tech stocks...

Tech Embraced Like Never Before, Under Carly Fiorina Leadership

First, let's talk about the idea that Fiorina screwed up as HP CEO. That's the biggest weakness of her campaign so far - and the biggest argument she "doesn't know tech." For example, the candidate has received consistent criticism for laying off some 30,000 HP workers.

But since the CNN debate in September, Fiorina has gone on the offensive. She noted that by the end of her tenure in 2005, HP actually had a net increase of roughly 20,000 jobs. She also hammered away at the point that many of the problems HP faced during her tenure stemmed from the aftermath of the "dot-com bust."

Second, Fiorina has already advised Capitol Hill on tech matters. Then-Secretary of State Colin Powell reached out to her after the 9/11 attacks while she was still running HP. He wanted to know how the government could share information between agencies more securely. Fiorina has worked with the Department of Defense and the National Security Agency in a similar capacity.

"If Fiorina were to become president, I'd look for tech companies, like HP, that facilitate communication to get some very big federal contracts," Robinson said.

As the first chair of the Central Intelligence Agency's External Advisory Board when it formed in 2007, she also has a strong background in defense. So she'd likely push for the Pentagon and Langley to add even more tech systems.

"Defense-tech contractors - and their investors - would be smiling," Robinson said. "Plus, even if she never makes it to Washington, her candidacy will constantly highlight the importance of investing in the nation's technology infrastructure."

"No one on the campaign trail now is a better advocate for that than Fiorina."