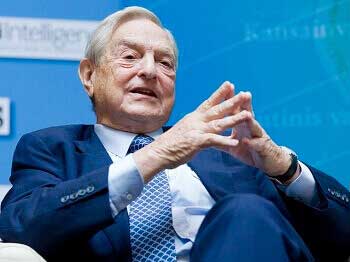 Activist investor George Soros is one of the few Democratic donors willing to drop eight figures in an election cycle.

It seems the Democratic establishment has appointed billionaire activist investor George Soros its "unofficial spokesperson" of the hour.

In an op-ed for The Guardian yesterday, Soros mounted an attack on GOP presidential candidates Sen. Ted Cruz (R-TX) and Donald Trump - both of whom happen to be leading in polls (Trump at 39.3% followed by Cruz with 9.6%, according to Reuters on Dec. 26).

Specifically, Soros called on voters to "resist the siren song of the likes of Donald Trump and Ted Cruz if the U.S. is to effectively fight terrorism."

George Soros: A Soldier for the Establishment

Throughout his op-ed, Soros blasts Cruz and Trump for fearmongering the public.

"Jihadi terrorist groups such as Islamic State and al-Qaida have discovered the Achilles heel of our western societies: the fear of death," Soros writes. "Through horrific attacks and macabre videos, the publicists of ISIS magnify this fear, leading otherwise sensible people in hitherto open societies to abandon their reason."

He goes on to say that, while it is difficult to resist the temptation of reacting with fear or resentment, we must not give in.

"I experienced this personally when I watched the last Republican presidential debate; I could stop myself only by remembering that it must be irrational to follow the wishes of your enemies," Soros laments. "To remove the danger posed by jihadi terrorism, abstract arguments are not enough; we need a strategy for defeating it."

First, the progressive, anti-conservative front knows the Republican Party has the edge on national security - the highest priority issue for voters right now. A Wall Street Journal/NBC News poll released on Dec. 14 found that 40% of Americans think national security and terrorism should be the government's top priority. More than 60% of those polled listed it in their top two spots. By comparison, the issue came in at 16% - the last out of four options - in the final poll before the 2008 election.

And it's clear from the latest polling numbers that both Cruz and Trump have struck a nerve with their antiterrorist campaigns. When national security fears heightened after the tragic Nov. 13 Paris attacks, Cruz and Trump shot up in the polls. A post-attack survey conducted by Florida Atlantic University found Trump's popularity had risen 4.5% to 36% since his last ranking in September (31.5%). In a separate poll of likely Iowa Republican caucus-goers conducted by Quinnipiac University after the attacks, Cruz received the support of 23%, up 10% from his Oct. 22 ranking (13%)

So the Democratic establishment has enlisted a big name to write an op-ed in a big publication on the issue.

Soros is a communist/anarchist. He has always funded causes that are antithetical to the success of America.

More than 60% of people polled think that national security and terrorism should be the government's top priority???? Wow!! These people should throw their tv out and quit reading the newspapers. What a bunch of talking monkeys!