The Belgium terror attacks dominated the news today, as bombs in the Brussels airport and a nearby train station killed at least 30 people and raised security alerts across the United States and Europe. The Dow Jones Industrial Average recovered in the afternoon, but ultimately closed lower for the first time in seven sessions as airline and travel stocks suffered and analysts expect limited international travel to Europe in the wake of the attacks and two previous terror attacks in France over the last 14 months. 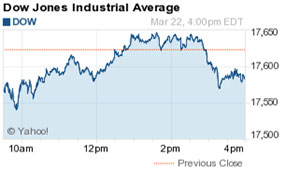 First up, travel stocks were the worst-performing stocks on the day, while gold and government bonds increased. Shares of American Airlines Group Inc. (Nasdaq: AAL), Delta Airlines Inc. (NYSE: DAL), United Continental Holdings Inc. (NYSE: UAL), and Southwest Airlines Co. (NYSE: LUV) were all off between 0.8% and 1.6% on the day. Meanwhile, shares of Carnival Corp. (NYSE: CCL) were off 2.1%, while travel sites Priceline Group Inc. (Nasdaq: PCLN) and Expedia Inc. (Nasdaq: EXPE) were off 2.3% and 1.8%, respectively.

Oil prices also rebounded after a dip this morning following the Brussels terror attacks. WTI futures for May fell 0.2% to close at $41.45, while Brent futures for the same month gained 0.6% to $41.79. With oil prices set to break out in the future, Money Morning Global Energy Specialist Dr. Kent Moors explains what you can expect next.

On the economic front, U.S. domestic home prices gained 0.5% in January, according to the FHFA. Overall, housing prices gained 6% from January 2015 to January 2016. Meanwhile, American manufacturing is expanding, with the Markit Flash PMI registering a 51.4. The Richmond Fed manufacturing index hit 22 in March, its highest level since April 2010.

Finally, the British Pound slumped 1.1% against the U.S. dollar after the Bank of England maintained its base interest rate at a historic low of 0.5%. The central bank has blamed its falling currency on fears about a potential exit from the European Union – commonly referred to as the Brexit. Today's terror attacks fueled additional calls by pro-Brexit politicians to leave the European Union over security concerns and desires to have greater control of their borders. Do UK voters want to leave the EU? Here's the latest update as the pound continues its free fall.