Monday's trading session was just another sign that the U.S. Federal Reserve is holding the markets hostage with mixed messages on the timing of its next interest rate hike. Like a dog told to come from across the yard while its leash is tied to a tree, the Dow Jones Industrial Average didn't go anywhere today as traders await a speech from Fed Chair Janet Yellen on Tuesday.

Yellen is expected to offer some insight on the upcoming FOMC meeting in April; however, we predict she will simply confuse everyone like she did during her most recent press conference. 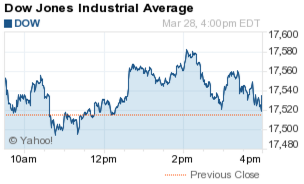 Oil prices slipped on thin volumes as the European markets were closed to observe the Easter holiday weekend. The big news today was that global energy producers have locked in April 17 as the date for a meeting in the Qatari capital Doha to discuss a potential freeze on oil output. Ten nations have confirmed they will attend the meeting. Libya, the country with the highest break-even oil price in the world, will not be present. However, the biggest speculation centers on whether Iran will take part in the meetings. Previously, the country said it will not take part in the plan until it increases its daily shipments to at least four million barrels.

It was another bad day for hedge fund manager Bill Ackman. U.S. legislators have asked Ackman for information about drug price hikes in the pharmaceutical industry. The investigation is tied to his large stake in Canadian drug company Valeant Pharmaceuticals International Inc. (NYSE: VRX), which has been facing more and more problems each day. Shares of VRX stock were off 7.1% after the firm increased the price of one of its drugs by 100%.

On the economic front, "core" personal consumption expenditures (PCE) increased more than economists had anticipated in February. That's good news for the overall economy, and the news boosts the odds that the Federal Reserve will hike rates in April.

But the big talk today was about Yahoo! Inc. (Nasdaq: YHOO). Rumors are circulating that Microsoft Corp. (Nasdaq: MSFT) is chatting with private equity firms about supporting the financing needed to take over Yahoo. The talks are preliminary as Yahoo considers the sales of its core businesses. YHOO stock added 1.1% on the day, which is rather underwhelming. Following activist hedge fund Starboard Value's call for a complete overhaul of Yahoo's board of directors, investors just aren't jumping on board or anticipating a company offering a significant bid for any of the firm's assets.

Oil prices have suffered one of the worst crashes in modern history. But despite today's losses, WTI prices have staged a massive turnaround this month, and there's one reason why they'll keep going higher in 2016 and beyond…