Dow Jones Industrial Average News, 4/11/2016: When it comes to stagnating growth in some of the world's largest economies, you have three choices when policy experimentation doesn't provide results: 1) You can take your medicine for all the bad economic policy over the years and allow the economy to heal naturally (albeit in an ugly fashion in the short term); 2) you can introduce badly needed structural reforms to your system in order address the underlying problems that caused the need for that bad monetary policy in the first place; or, 3) you can ignore all the warnings and just "Keep Printing More Money!"

Take a guess at what China is most likely to do?

The expectation of even more financial stimulus had the markets ticking higher today, until earnings worries settled in. The early morning uptick proves that so long as the music is playing, central bankers will dance and keep papering over their economic problems.

It's great for markets in the short term… but without reform, this will end poorly. 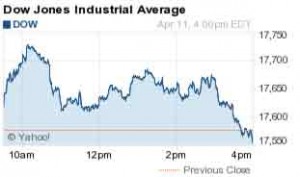 Let's kick off with deal news. Rumors about a Yahoo! Inc. (Nasdaq: YHOO) deal continue to suck up all the oxygen from the conversation. The Wall Street Journal reports the Daily Mail & General Trust Plc. is working with private-equity firms to discuss a deal for the Internet company. Yahoo announced it has extended its first deadline to April 18 for auction bidders, which also include Verizon Communications Inc. (NYSE: VZ), CBS Corp. (NYSE: CBS), and IAC/InterActiveCorp (Nasdaq: IAC).

In central banking news, one current and three former members of the American branch of "The Committee to Destroy the World" – otherwise known as the U.S. Federal Reserve – met last week in a public forum to discuss their work. After this nonsensical event, Money Morning Global Credit Strategist Michael Lewitt had one thing to say about the state of the global markets. You'll want to read his warning right here.

On the economic front, President Barack Obama met with U.S. Federal Reserve Chair Janet Yellen to discuss economic and regulatory issues. Translation: "Ms. Yellen, what can you do to make the bottom not fall out during my last year of office after seven years of uncharted monetary policy?" Yellen is attempting to navigate the normalization of interest rates as concerns about the global economy weigh on investor sentiment.

This pick is still a winner: This stock's 1,300% increase in 12 years is impressive. But this firm's investments in next-generation tech mean the ride isn't over. This stock could surge another 50%…