After living through a few, you know all about "recessions."

A recession is two consecutive quarters of declining gross domestic product (GDP). While it may feel like it at times for some folks, according to economists, we're not in a recession.

However, now that we're right in the middle of first-quarter earnings, it looks like we might be seeing the third straight quarter in which S&P 500 stock profits are lower on a year-over-year basis.

That puts us in an "earnings recession."

You can blame this recession on market volatility, the Chinese and European slowdowns, slumping oil prices, and/or widening credit spreads in the bond market.

Whatever the case, this earnings recession just offered up a chance to buy two prime tech stocks at steep discounts.

How We Got Here

But before we get to that, let's take a closer look at this "earnings recession."

Analysts surveyed by FactSet Insight expect S&P 500 Index stocks to report a year-over-year decline in earnings of 9.1% for the first quarter.

The researchers at FactSet aren't expecting numbers that bad – they're projecting a decline of 5.8%. Still, that would make Q1 2016 the third quarterly decline in a row.

The last time this happened was in 2009, when profits fell for the first, second, and third quarters.

That's not great news… but it did just put two of the best tech stocks out there on sale.

And to find those sales, we don't need to look much further than two members of the Internet Dream Team I introduced you all to at the start of this year. 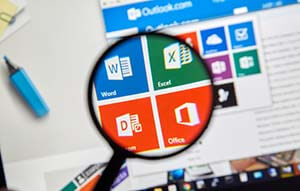 Microsoft Corp. (Nasdaq: MSFT), one of the five members of our "Dream Team," has beaten earnings expectations for 10 straight quarters, and its stock price demonstrates this success. Microsoft is up 35.7% since CEO Satya Nadella took over from Steve Ballmer in February 2014.

Analysts had expected Microsoft to earn $0.64 a share. The forecast for revenue was $22.1 billion.

Shares of MSFT were down nearly 8% following the report.

On the other hand, the company's cloud business grew even more than expected. And as I've been telling you here, that – along with growth in mobile – is where Microsoft's future is.

Since taking the CEO office, Nadella has focused on a "mobile first, cloud first" strategy. Microsoft has been trying to counter the impact of a steep decline in the PC market, which affects the sales of its two flagship products, Windows and Office.

Microsoft is doing so by emphasizing its Azure commercial cloud business as well as the transition of Office to a subscription-based "Software-as-a-Service" (SaaS) model.

Over the past few quarters, growth in Microsoft's cloud businesses has more than offset the ripple effects of lower PC sales.

As of last quarter, Microsoft's commercial cloud business had grown to an annual run rate of $9.4 billion. The company's goal is to get the cloud run rate to $20 billion by 2018.

Looking ahead a year, I can see Microsoft reaching $70 – a 35% gain from today's down price.

Despite Microsoft's poor showing, this is a stock you should buy a stake in if you haven't already – and then accumulate more on dips… like the one we're seeing today.

Since it's so close to its all-time highs, you'd be right to wonder whether there's any profit left to be made in Alphabet Inc. (Nasdaq: GOOGL).

Especially after its blazing fourth-quarter report. Then, Alphabet reported advertising revenue of $19.08 billion. That was up 17% from the previous year and accounted for 89% of Alphabet's $21.33 billion in revenue.

The company said that it suffered from a stronger dollar and increased spending to boost traffic for its mobile advertising services.

The firm is still a behemoth in advertising. Alphabet said that its ad revenue surged 16.2% to $18.02 billion, while paid clicks increased by 29%.

In fact, it's a stock that you want to hold – almost – forever.

Few companies ever dominate their core markets the way Google does.

The firm went public in 2004 and today has a market cap of $486.8 billion. It also controls roughly 80% of online search in the United States – that's market dominance on steroids.

And here's some more. In 2007, Google launched its Android mobile operating system, and as of second-quarter 2015, Android commanded an 82.8% share of the smartphone operating system market, according to IDC.

To keep Google itself focused on its core mission, the company recently restructured. Under that plan, the Google operating unit includes search (of which it controls 64.4% of the market), Android, YouTube, and the Chrome web browser.

Alphabet will manage a growing list of non-web businesses. These include everything from building robots and self-driving cars to exploring opportunities in human longevity and virtual reality.

That leaves Google free to pursue its ambitious plans to become an "end to end" Internet firm. The company's goal is to deliver incredibly fast web speeds and, in so doing, transform Internet coverage and online streaming.

The truth is, investors expect a lot out of companies like Alphabet and Microsoft. And that means their stock prices are often volatile after earnings.

But because of their strong core businesses and growing revenue from new technologies, they will reward long-term investors. Over the last 12 months, Alphabet has soared 33.6%, and Microsoft is up 19.5% – and those climbs are going to continue for years to come.

And if you invest in these companies and others like them – like those in the Internet Dream Team – your wealth will continue to climb, too.

The Best Play in Defense Right Now: This company is the bluest of the blue chips when it comes to defense stocks. Its host of government contracts, well-supplied profit pipeline, and generous dividend ensure it will become one of the decade's best defense plays. And with revenue expected to hit $50 billion by 2017, now's the perfect time to buy in…