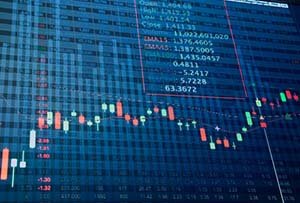 Dow Jones Industrial Average News, 5/6/2016: Only in this crazy market can we see tepid job growth, weakening manufacturing numbers, and still see the Dow rally more than 70 points in a day. The markets pushed higher as weakening data suggests that the U.S. central bank won't move on interest rates in the near future, meaning the era of loose monetary policy can continue.

According to the U.S. Labor Department, the nation created 160,000 nonfarm jobs in April, a steep slide from the 202,000 projected by a survey of economists. This is the weakest job figure since September.

Gold futures spiked after the U.S. Labor Department announced weaker than expected job growth in April. Although the official unemployment rate remained at 5%, investors were cautious about the health of the American economy. They now anticipate that the U.S. Federal Reserve will wait much longer before hiking interest rates again. Gold prices gained 1.4%, while silver prices pushed up nearly 1%. (In fact, one billionaire sees it going higher, and you can read all about it right here.)

According to CME Group, there is just a 13% probability that the Federal Reserve will boost rates during its June committee meeting. December is the month when CME FedWatch projects the odds of a rate hike will be north of 50%.

Despite the weak jobs report and reduced expectations for the next hike, New York Fed President William Dudley said April's employment performance did little to impact his economic outlook and predicted that markets can still anticipate two rate hikes this year.

WTI crude oil prices continued to climb Wednesday as global supply disruptions and declining production in the United States continue to fuel the case for higher prices. In a key piece of data released this afternoon, oil field services giant Baker Hughes Inc. (NYSE: BHI) announced that the U.S. production rig count fell by another four platforms last week. The total number of U.S. rigs has declined by 340 compared to the same time last year, signaling a massive decline in domestic production in the face of falling oil prices and increased bankruptcies in the sector.

Meanwhile, Brent crude prices ticked up as wildfires in Alberta, Canada, have slashed the nation's oil output by one-third. Meanwhile, militants in Nigeria attacked a production platform owned by Chevron Corp. (NYSE: CVX), while fighting in Libya raised concerns about the nation's output in the months ahead. CVX stock still finished the day up 0.3%. Supply and demand stories like these have our Global Energy Specialist revising his oil forecast upward.

You can see where oil prices are heading next, right here.