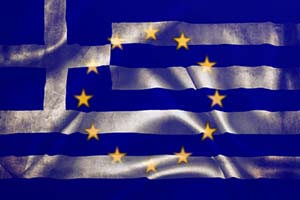 Dow Jones Industrial Average News, 5/25/16: The United States is bailing out Puerto Rico, and the International Monetary Fund is bailing out Greece. Seven years after the worst financial crisis of this young century, we've learned nothing.

But that's not all. Here's the rest of today's top stock market news, stocks to watch, ways to profit, and economic calendar for May 25, 2016.

Futures for the Dow Jones Industrial Average today (Wednesday, May 25) projected a 63-point rally on news the International Monetary Fund agreed to a "breakthrough" deal with Greece to address the beleaguered nation's ongoing debt challenges.

In other market news, investors will be looking for an update on U.S. exports, while the latest FHFA report offers insight on price appreciation in the housing sector. Yesterday's strong report on new home sales offered a jolt for the economy and fueled greater expectations the U.S. Federal Reserve will raise interest rates in June or July.

On the deal front, there's another big shakeup at Hewlett Packard Enterprise Co. (NYSE: HPE). The firm said it will engage in a tax-free spin-off of its technology division and merge it with Computer Sciences Corp. (NYSE: CSC). The deal will move roughly two-thirds of HPE's workforce into the newly created firm. Shares of HPE stock were up nearly 10% in pre-market hours.

Meanwhile, Monsanto Co. (NYSE: MON) stock gained another 2.2% in pre-market hours after the firm rejected a $62 billion offer from German drug and chemical maker Bayer AG (OTCMKTS ADR: BAYRY). The global seed manufacturer said it will seek a higher price and continue negotiations on behalf of shareholders. Analysts expect that such a deal could receive regulatory approval.

WTI crude oil prices were pushing toward $50 per barrel as supply concerns abated around the globe. WTI gained 0.8%, while Brent crude pushed up 1.1%. Investors will be waiting for a key inventory report later this morning from the Energy Information Association (EIA) on crude stocks in the United States.

The big news in the energy sector this morning? Shares of Royal Dutch Shell Plc. (NYSE ADR: RDS.A) ticked up nearly 1% after the energy giant announced plans to cut 2,200 jobs to reduce costs in the face of lower oil prices.

Watch These 5 Companies in 2016… There was hardly any IPO activity last year. Only 170 companies hit the market in 2015 – down from 275 in 2014. But this year will change all that as some of the biggest firms on the planet prepare to go public. Here are the five companies we're watching this year…