The Dow Jones Industrial Average today (Tuesday, May 31) fell more than 86 points as traders' expectations for a rate hike in June accelerated. A massive increase in consumer spending levels and a tightening labor market put the U.S. Federal Reserve back in focus. According to CME FedWatch, there is now a 61% probability the Fed will increase interest rates at its July policy meeting.

Of course, Money Morning's gurus have been well ahead of this story, explaining that rate normalization will have harsh consequences for a nation with $19 trillion in debt. In addition, Chief Investment Strategist Keith Fitz-Gerald has explained it doesn't matter if rates go up or down. You simply need to follow this simple strategy that provides long-term profit potential by focusing on companies that manufacture "must-own" products.

Give Your Portfolio a 326% Performance Advantage: Everything you need to grow your wealth like never before is in this guide - including a strategy to outperform the S&P 500 by triple digits. You'll also get five stocks backed by "unstoppable trends" for solid gains in any market conditions. Click here to start making more money today... 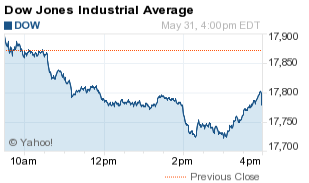 First up, the case for another interest rate hike was bolstered on news that consumer spending levels recently saw the largest monthly increase in six years. Consumer spending - which fuels roughly two-thirds of the U.S. economy - increased by 1% in April. This rise adds greater justification to Fed Chair Janet Yellen's statements on Friday that an interest rate increase this summer would be appropriate.

Next, Apple Inc. (Nasdaq: AAPL) is in focus on reports it will be shifting to a three-year product cycle for its iPhones. That's a year longer than its current cycle of product upgrades. Analysts expect the decision was based on the lack of dynamic upgrades and new features that can be added to a phone. Japan's Nikkei reports a slowing market for new phones is also a big factor in the firm's decision. However, RBC Capital Markets analyst Amit Daryanani raised some doubts about the reports during an interview on CNBC.

Shares of AAPL stock slipped back below $100 today after a strong two-week stretch. The firm has been tied to rumors that it could purchase Netflix Inc. (Nasdaq: NFLX) and received a big boost after Berkshire Hathaway Inc. (NYSE: BRK.A) announced a massive stake in the technology giant.

Crude oil prices retreated slightly today after the oil minister of the United Arab Emirates Suhail Al Mazroui voiced his pleasure with the recent uptick in prices over the last three months. His statement indicated OPEC producers - which will hold a meeting this week in Austria to discuss prices - are increasingly optimistic that crude has found a support level. The markets have generally shunned concerns about Iran's unwillingness to curb production as it brings its crude oil back onto the market.

WTI fell 0.5% to $49.10 despite heightened demand expectations in the United States. The U.S. benchmark posted its fourth monthly gain in a row. Meanwhile, Brent crude dipped 0.1% to $49.69 on the day. The $50 mark has been under significant pressure. That's the psychological barrier expected to push U.S. shale producers back into operations after months of being shutdown.

But the big news today - aside from the surge in interest rate expectations - was the massive deal on the table for global agricultural giant Monsanto Co. (NYSE: MON). According to reports out of Europe, German drug and chemical giant Bayer AG (OTCMKTS ADR: BAYRY) is expected to hike its offer in the coming week. Monsanto recently turned down an offer of $122 per share. Shares of MON stock gained another 2.6% as traders speculate on just how much the German firm is willing to sweeten the deal.

Now, let's look at the day's biggest stock movers and the must-own stock for today...

Oil prices suffered one of the worst crashes in modern history from June 2014 to Feb. 2016. But the WTI crude oil price has seen a huge rebound over the last month, and there's one reason why they'll go even higher this year...

The 5 Most Significant IPOs to Watch This Year: There was hardly any IPO activity last year. But we're tracking these five companies to see if they'll go public in 2016. If they do, they'll be the most promising deals of 2016...