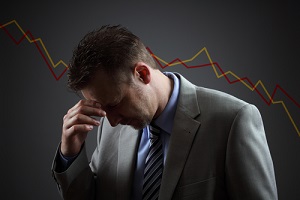 Investors are starting to regain confidence in global markets after the Brexit vote, but they shouldn't get too comfortable.

That's because the issues that could cause a July stock market crash have not gone away...

You see, the Brexit results came as a surprise to most traders. And a large, unexpected event like the Brexit results can cause a short-term sell-off in the global markets. Just look at the immediate performance of the markets after the vote. The Dow Jones Industrial Average dropped 4.21% between June 24 and June 28.

And while the Dow, S&P 500, and Nasdaq have regained some of their losses, the issues are far from over.

In fact, there are three signals that indicate a July 2016 stock market crash could be imminent...

Stock Market Crash Sign No. 3: The Fed Is Unable to Raise Interest Rates

The U.S. Federal Reserve being able to raise interest rates is an important indicator of economic health for the United States.

When the Fed raises rates, it has a certain level of confidence that Americans can pay higher interest rates.

But it doesn't look like a rate hike is coming any time soon...

The unemployment rate fell in May to a nine-year low of 4.7%. But job creation was incredibly low. The U.S. Labor Department reported only 38,000 jobs were created in May, far below estimates of 160,000 new jobs.

And the housing market also shows the U.S. economy is in trouble...

AP attributes rising home prices and limited supply for the slump. And the fact that people can't afford new homes even with mortgage rates near historic lows is an indication Americans are not making enough money.

That means the U.S. economy is weak, and the Fed doesn't want to let on just how much trouble we are all in.

But there is also global economic turmoil that could trigger a July 2016 stock market crash...

On June 24, the pound slid to its lowest levels in 31 years, according to ABC News.

The Brexit may have caused knee-jerk reactions to currencies, but there could be even bigger problems down the road...

Because of currency devaluation and negative interest rates applied by certain European countries, Money Morning Global Credit Strategist Michael Lewitt believes currencies like the euro and the yen will eventually be destroyed.

Lewitt believes that negative interest rates are a last-ditch effort to try to stimulate and save an economy.

"It is a tactic with profound political and moral consequences that must be exposed as a betrayal of the social compact between governments and citizens," said Lewitt.

Sweden and Denmark are both members of the European Union (EU), so each of these economies are now especially vulnerable to the long-term consequences of Britain leaving the EU.

And while those are serious warning signs of a stock market crash, this is the biggest reason yet we've seen...

Stock Market Crash Sign No. 1: Experts Are Preparing for a Crash

One of the best ways to tell if a stock market crash is approaching is to follow gold-purchasing trends.

Since the beginning of 2016, investors have been flocking to gold. The precious metal is highly sought after during periods of economic uncertainty. Gold helps protect against portfolio losses when currency loses its purchasing power and stocks plummet because the price of gold generally rises during this time.

But it's the moves of billionaire investors like George Soros and Stanley Druckenmiller (a protégé of Soros) that are especially important to follow...

At a conference in May, Druckenmiller told attendees that gold is his largest currency allocation. Druckenmiller stated U.S. companies are relying too heavily on financial engineering, such as stock buybacks and acquisitions, to boost value.

He was also concerned about China's slowing economy.

The Bottom Line: The odds of a 2016 stock market crash are growing after the Brexit results. But the new triggers our readers need to focus on for July are the FOMC meeting, currencies continuing to plunge, and billionaire investors pulling their money from the markets and loading up on gold.

Protect Yourself from a July Stock Market Crash: The warning signs for a stock market crash are clear as day. So before the global economy collapses, you have to see these three must-have investments for 2016...