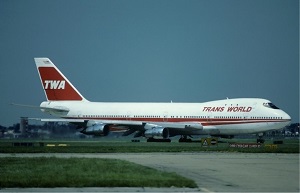 Here's a refresher: TWA Flight 800 took off from JFK Airport on July 17, 1996, en route to Paris. Just 12 minutes into the flight, the plane exploded over the shores of Long Island. The 230 people on board were all killed.

In the wake of the explosion, several hundred eye witnesses came forward with claims they'd seen a projectile heading toward the plane before it crashed mid-air.

But ultimately, Uncle Sam never offered up a definitive answer.

After 16 months and $20 million, the Feds concluded the probable cause was a crack in the plane's insulation had allowed high voltage from the lighting circuitry to create a spark that ignited the vapors in the empty fuel tank.

Twenty years later and still there are many skeptics out there who believe a different explanation of how the plane went down...

You don't have to be a member of the tinfoil hat club to buy this TWA Flight 800 conspiracy theory -- it's far more plausible than the government's finding.

Hank Hughes, who was the National Transportation Safety Board's (NTSB) senior accident investigator for TWA 800 at the time, remains among those who believe - to this day - the flight was shot down.

"I'm no conspiracy theorist," Hughes told the NY Daily News in April 2015, "but let's be clear: Yes. I say it was [shot down]. And I believe the FBI covered it up... Lots can go wrong with an airplane. Engines can fail; they can catch fire. Devices can malfunction. Pilots make errors. But jets do not explode in midair."

Editor's Note: Evidence suggests the Vatican collaborated with Nazis during World War II. Here's a look at the scandal that remains unsolved... 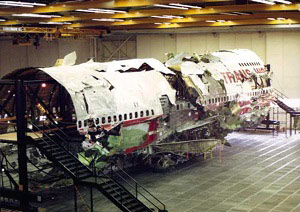 Hughes went on to explain that during the initial investigation, the FBI wouldn't allow TWA's own mechanics to examine the wreckage that supposedly contributed to the explosion during their investigation.

Furthermore, according to Hughes, once TWA mechanics were permitted to scrutinize the evidence, they couldn't find a single piece of cracked insulation in the 159 miles of wire recovered in the investigation. Had the insulation actually been cracked, then the FBI's claim that the fissures had sparked a fire in the empty fuel tank would've made sense.

This led Hughes to believe that the FBI was actively trying to cover up their true findings.

As to why the Feds would want to keep the real cause of the crash a secret, there are two shocking reasons...

TWA Flight 800 Conspiracy Theory No. 1: The U.S. Shot Down Its Own Plane

This is where the dozens of witness accounts reporting seeing contrails in the sky prior to the explosion come back in.

On Nov. 7, 1996, according Reuters (and reprinted in the Globe and Mail), former Kennedy advisor and ABC foreign correspondent Pierre Salinger, who was speaking to airline executives in Cannes, France, accused the U.S. Navy of firing a training missile at the airliner.

But then on Nov. 9, 1996, The Washington Times reported that Salinger retracted his accusation on the basis that he'd received anonymous "Internet files" as his "evidence" to make his claim.

Regardless of Salinger's retracted statements, there was a Navy Aegis guided missile cruiser known to be operating south of the jet's flight path that day. According to a Sept. 17, 1996, report in The New York Times, eyewitness testimonies stated the ship had let loose a practice shot that went awry.

A series of terrorist events leading up to the TWA Flight 800 explosion -- and one incident just days afterward - led many to suspect foreign acts of terror were to blame.

Even the White House had their suspicions.

Terrorist Events Leading Up to the TWA Flight 800 Explosion

Dec. 21, 1988: Pan Am Flight 103 explodes over Lockerbie, Scotland, killing all 270 people on board. This attack was eventually found to have been orchestrated by a Libyan national.

Feb. 26, 1993: A bomb explodes at the World Trade Center, killing six people and injuring more than 1,000. Ramzi Yousef, a Pakistani national, was the mastermind of that attack.

April 19, 1995: The Alfred P. Murrah building in Oklahoma City is bombed. The blast destroys large parts of the building and kills 168 people, including 19 children. Two Americans, Timothy J. McVeigh and Terry L. Nichols, were eventually convicted for the attack.

June 25, 1996: A powerful truck bomb explodes on the perimeter of a U.S. military complex in eastern Saudi Arabia. Nineteen U.S. Air Force personnel were killed and several hundred were wounded.

July 27, 1996: A bomb explodes at the Olympic Games in Atlanta, killing one person and injuring over 100.

"The investigation was looking at almost every possibility, including state actors, because we'd known that Libya had been involved with regards to bringing down the airliner over Scotland [Pam Am Flight 103]," Leon Panetta, former secretary of defense and former CIA director, who was chief of staff for President Bill Clinton at the time of the crash, told CNN on July 15, 2014. "We were looking at Iraq and Saddam Hussein. We were looking at, you know, the possibility of even Iran might have played a role in this."

Fueling terrorism suspicions were also reports that a reddish-brown substance was observed on the backs of recovered passenger seats. This substance was possibly indicative of explosive residue or rocket fuel.

TWA chief 747 pilot Robert Terrell Stacey, who was participating in the official investigation as a TWA representative at the time, was also convinced the flight had been shot down intentionally. In the months following the explosion, he worked with journalist James Sanders, and Sanders' wife Elizabeth, to clandestinely remove items from the wreckage reconstruction site.

In 1997, Sanders published the book "The Downing of TWA Flight 800," in which he proposed that TWA 800 had been taken out by a foreign military missile and that a U.S. government cover-up was put in place to avoid public panic.

On Dec. 5, 1997, federal prosecutors charged Sanders, his wife Elizabeth, and Stacey with theft of government property.

Later, the NTSB's final report would state that, because of a lack of any other corroborating evidence associated with a high-energy explosion, they believed the in-flight breakup of TWA Flight 800 was not initiated by a bomb or missile strike.

Editor's Note: A stock market crash could be coming, courtesy of Japanese Prime Minister Shinzo Abe and the Bank of Japan. Here's how to brace for impact...

Of course, the NTSB's official statement is also that of the U.S. government, so if Sanders' theory - which aligned with countless others at the time -- that Uncle Sam was keeping the true story of the incident hush-hush, the NTSB's findings would come as no surprise.

What did come as a surprise, however, was news that former President Bill Clinton had wanted the investigation to "resolve as quickly as possible" since 1996 was an election year...

It was, after all, an election year, and his ratings as the incumbent presidential candidate were sky-high thanks to the Welfare Reform Bill.

There was just one problem impeding the investigation's quick resolution: Jim Kallstrom, then FBI assistant director.

You see, Kallstrom knew that traces of PETN and RDX (explosives) were found on the plane and had been confirmed by the D.C. lab investigating the crash.

Kallstrom also knew what the countless eye witnesses claimed to have seen.

Now, for over a month after the crash on July 17, 1996, the former FBI assistant director appeared to be keeping all talk of eyewitness accounts and missiles out of the news.

However, Kallstrom was leaking investigative details exclusively to The New York Times.

On Aug. 22, 1996, Kallstrom was summoned to Washington where he allegedly attended a private conference with then Attorney General Janet Reno.

But if the two met just so Reno could throw Kallstrom's media-leaking back into his face, it was too late.

On Aug. 23, The New York Times published an article entitled "Prime Evidence Found That Device Exploded in Cabin of Flight 800." The expose effectively stole the thunder from Clinton's election-driven approval of welfare reform, while threatening to disrupt the peace and prosperity message of the following week's Democratic convention.

On Nov. 8, 1996, Jim Kallstrom hosted a press conference in which he denounced the conspiracy theories that the U.S. government was involved in the incident and its cover-up.

A year after that, on Nov. 10, 1997, the FBI formally ended its 16-month investigation, stating that it had found no evidence of a criminal act.

The Denver International Airport opened its runways on Feb. 28, 1995 - about 16 months behind schedule and nearly $2 billion over budget.

Suspicions swirled over the hub's $4.8 billion price tag - and over its sheer size. DIA spanned 35,000 acres, roughly twice the size of the next largest airport in America.

The problem with the NAVY Aegis missile theory is that the ship, part of a larger training exercise involving several ships and aircraft, was to the SOUTH of the airliner's flight-path and Long Island – where several witnesses saw what appeared to be a missile flying south out over the Atlantic. Kalstrom's people confiscated photos from a couple who had been dining at a restaurant in East Moriches and a snapshot of them outside clearly showed a contrail emanating from a long dark cylinder (with the aft end glowing as if on fire) tracking south out to where the plane exploded seconds later.

ANYONE, seeing that photo (as shown on NY TV news) and the least bit familiar with missiles, rockets or even airplanes, would be correct to assume it WAS a missile – but a missile which originated to the NORTH of East Moriches – not SOUTH.

The explosive residue on some of the seat backs was originally explained (by the FBI) as left from a bomb training exercise. The FBI dismissed the missile theory due (their claim) to the lack of damage consistent with a missile explosion.

Some theorists put forth the possibility of a 'Cruise Missile' while the FBI discounted that citing the typical cruise altitude of such missiles. However, air-launched cruise missiles routinely fly at altitudes even higher than the airliner when it exploded – dropping to lower altitudes much later in-order to take advantage of 'terrain-masking' so radar controlled or guided weapons cannot intercept them.

In a NAVY training exercise, where the missile could be launched from a ship, plane, submarine or land-base (north of East Moriches), its altitude COULD be pre-programmed to fly high enough to down an airliner at IT'S cruising altitude. Why? Let's leave THAT to NCIS.

Accidental or deliberate will have to be determined once the missile theory is proven. Aircraft HAVE been accidentally downed by US NAVY missiles in the past – according to eyewitness accounts by current and former NAVY personnel. I spoke with one such seaman aboard a missile frigate in the CIC. It seems one of the NAVY helicopters was passing overhead during a training missile launch and was sliced in-two without the missile exploding. You can ask most 'old-timers' or even view some of the videos on YouTube to get an idea how often 'accidents' like this happen.

Although raising an interesting possibility, other scientists dismissed this theory due to the extremely low probability of a bolide's intersecting the aircraft's flight path at precisely the required moment. Scarry has since written about Swissair 111 and Egypt Air 990 crashes in connection with electromagnetic radiation.