5:30 p.m. Update: Microsoft stock jumped as much as 3.5% in after-hours trading on a strong Q4 earnings report.

Powered by a jump in its cloud-based business, earnings per share hit $0.69, beating expectations for $0.58 as well as last year's EPS of $0.62. Revenue also beat slightly, coming in at $22.64 billion. The consensus forecast was for sales of $22.2 billion.

Investors cheered the 102% growth of Microsoft's Azure cloud business. But it wasn't the only bright spot. Commercial revenue from Office 365 grew 54% and search advertising was up 16%.

Even Windows did well, with non-pro revenue rising 27%.

The only blemish was phone revenue, which plunged 71% as a result of Microsoft's decision to essentially throw in the towel on its smartphone business.

Microsoft stock could get a lift this week from a solid Q4 earnings report, due out today (Tuesday) after the market close.

While the numbers themselves aren't likely to wow anyone, investors will be looking for signs of continued progress in several key areas, particularly the company's cloud business. Investors will also be keen for any updates on Microsoft Corp.'s (Nasdaq: MSFT) recent $26.2 billion purchase of LinkedIn Corp. (NYSE: LNKD).

Microsoft is expected to report earnings of $0.58 a share, a drop from the $0.62 the company reported in its Q4 last year (Microsoft's fiscal year ends June 30).

Wall Street is looking for revenue to be flat year over year at about $22.2 billion.

But this won't be a ho-hum earnings report for MSFT stock. The company is in the midst of a massive, critical transition. How well that transition is going is what will move Microsoft stock.

MSFT stock could use a shot in the arm. Shares are down about 3.7% in 2016, although in the past month Microsoft stock has rallied 6.7%. 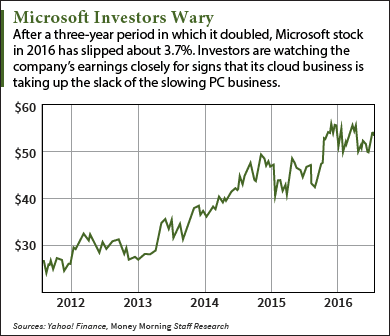 The Microsoft stock price has definitely cooled off from its pace of 2013 through 2015, when it doubled.

What to Expect from the Microsoft Q4 Earnings

The Cloud: Microsoft's Azure business, which competes with Amazon.com Inc.'s (Nasdaq: AMZN) Amazon Web Services, is a linchpin of Microsoft's future growth strategy. Azure grew 120% year over year in the previous quarter. Stifel Nicolaus & Co. analyst Brad Reback is looking for Azure growth of 95% year over year in Q4, a figure that should please investors.

Office 365: Until now, Microsoft's transition from selling Office as a permanent license product to one where customers pay a monthly subscription has cost more revenue than it has brought in. But the transition has been successful, with more than 22 million users now signed up for Office 365.

That means MSFT is close to a tipping point where the recurring subscription revenue will begin to exceed the lost one-time sales of the permanent license version. Investors will want to see that this transition remains on track, as it is another important source of future revenue growth.

Windows 10: Despite its impressive adoption rate, Windows 10 will not meet Microsoft's self-set target of getting on 1 billion devices by June 2018 (it's at 350 million now). That's a symptom of the misfired Lumia smartphone business, from which Microsoft wisely is backing away.

Sales of Windows on PCs is again expected to take a hit as a result of a global decline in PC shipments of 4.5% last quarter.

LinkedIn: The LinkedIn purchase brings with it data on 477 million active users, which could serve as an accelerant to Microsoft's Office 365 and Azure cloud businesses. The question is how they plan to make that happen. Investors will be studying the earnings conference call for clues on the company's plans to integrate the LinkedIn business.

All that said, this one earnings report won't determine whether Microsoft stock is a buy or not. For that answer, investors need to look at the long-term picture…

Why Microsoft Stock Is a Buy Regardless of the Q4 Earnings

Unless the Microsoft Q4 earnings are shockingly bad, the long-term case for the stock is a solid buy.

How Bitcoin Lapped Every Other Investment Class: While the mainstream media made much about the collapse of the Bitcoin price in 2014, few have taken notice that over the past three years the digital currency has delivered annual returns that dwarf everything else out there. And you'll be stunned at Bitcoin's outlook for the years ahead…

Looking further down the road, Microsoft has the very promising HoloLens augmented reality technology. Just about every major tech company is working on virtual reality/augmented reality, and HoloLens puts Microsoft at the forefront. This won't have much impact on MSFT's revenue for several years, but has the potential to be a major source of growth eventually.

Investors need to look at Microsoft stock as a long-term buy at this point. At a current price of about $53, it's only $5 short of the $58 one-year price target. That's only about a 9% gain.

But given Microsoft's long-term catalysts, patient investors will do much better. Given annual growth of about 10%, Microsoft's earnings per share should reach $3.87 by 2020.

Up Next: Why Markets Could Get Even Scarier