The price of silver per ounce has been slipping all week, but we still see double-digit gains ahead for the precious metal in 2016.

Why the Price of Silver per Ounce Is Down 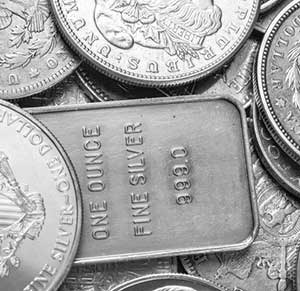 A strong rally from stocks this week is the biggest reason for the slump in silver prices. Wednesday, the Dow closed at a seventh consecutive record high and logged its ninth straight session of gains.

As investors piled into stocks, the CBOE Volatility Index (the market fear gauge) closed at 11.77. That was the VIX's lowest level since August 2014. The VIX fell for the sixth consecutive session mid-week, its longest losing streak since April.

A spate of better than expected earnings reports also had investors pouring into stocks this week. The bar for corporate earnings was set very low this quarter, making it easier for companies to beat earnings per share (EPS) estimates.

But simply "beating" estimates is not a sign of strength…

With about 7% of S&P 500 companies having reported at the start of this week, Q2 2016 profits are on pace to fall by 5.5%, according to FactSet. If that pace continues, it will mark the fifth consecutive quarter of declining profits. Sales are down 0.6%.

And that weakness will actually be good for the price of silver per ounce in 2016.

Another reason silver prices fell this week was the European Central Bank's decision Thursday to leave interest rates unchanged. The ECB kept the rate on the main refinancing operations at 0.0%, the marginal lending facility rate at 0.25%, and the deposit facility at -0.40%.

While the ECB didn't move this week, the bank said it planned to keep rates low for an "extended period of time." Additional stimulus is expected as the fallout from the UK's June 23 vote to exit the EU unfolds.

The Bank of Japan and the U.S. Federal Reserve both hold meetings next week.

The BOJ is expected to implement more monetary easing when it meets July 28-29. The Fed is overwhelmingly not expected to hike rates at its July 26-27 meeting. Still, any tone or hint of an interest rate hike will be closely watched.

A spate of economic data suggests the U.S. economy is on solid footing, and Brexit fears have faded. In fact, a Wall Street Journal survey of economists conducted over the last several days reveals an interest rate hike is expected as early as the Fed's Dec. 13-14 policy meeting.

But a lot can happen between now and then. And the outcome of the U.S. presidential election is a wildcard that could seriously rattle markets.

This uncertainty is providing a cushion for silver prices in the short term. And looking even farther out, we see the price of silver per ounce climbing above this year's high of $20.73 hit on July 11.

Where We See Silver Prices Headed in 2016

Money Morning Resource Specialist Peter Krauth says a temporary pullback in silver prices is to be expected after this year's sharp gain.

Silver has been and remains one of the best-performing asset classes this year, with prices up nearly 50% at their 2016 peak.

Krauth sees the silver price rising to $22 by the end of the year. That's a gain of 12% from today's silver price.

The biggest catalysts for silver prices include:

The marijuana industry has been an afterthought for investors for years.